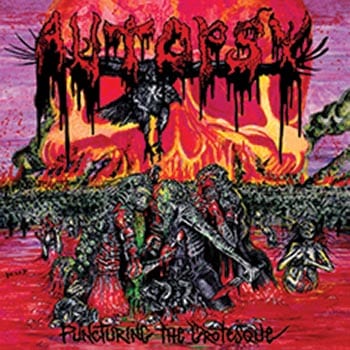 DEATH METAL LEGEND: Autopsy is nothing if not consistent. After all, with a title like Puncturing the Grotesque, it’s clear right from the get-go what listeners should expect from this new mini album—pure, unadulterated extremity. The West Coast legends are pioneers of the sludgy, sleazy, and filth obsessed style of death metal, one which has gone on to influence numerous bands in their wake. Puncturing the Grotesque showcases that sometimes the old guard still does it best, however, offering up six new tracks and a Bloodbath cover that sound remarkably fresh and vital, considering Autopsy has been kicking ass since the late 80s. The lurching pace and doomed horror movie atmosphere is ever present, but particularly evident on such tracks as “Corpses at War,” bringing to mind some of the most grim and evocative Italian and Spanish horror classics from the 70s and 80s. Vocalist/drummer Chris Reifert is also in fine form here, leading the charge with a gurgling growl that somehow manages to pack in more charisma than a hundred of today’s new jack death metal hopefuls. Ultimately, Puncturing the Grotesque does exactly what a good mini album should do—get the band’s audience excited for the next full-length. If Autopsy’s next album is as strong as this, then 2018 should be a very good year. ~ George Pacheco