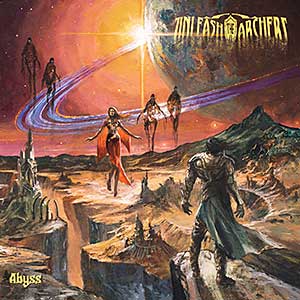 Both Apex and Abyss were originally written as a pair, and at the time, the band was considering releasing them as a two-disc set. Although both albums are related story-wise—while also sharing a strong musical connection—they are two totally different albums. On Abyss’ 10 anthemic odes, vocalist Brittney Slayes, drummer Scott Buchanan, guitarists Grant Truesdell and Andrew Kingsley play a perfect blend of 80s traditional metal with fast paced 90s European power metal. Although the band experiments more with synths and orchestration on this record, they’ve kept the classic Unleash the Archers power metal elements.

Opener “Waking Dream” introduces the conceptual story with an uplifting lyric, catchy vocal line, and melodic instrumentation. The main riff eventually returns on the chorus of the triumphant album closer “Afterlife,” which works in tangent and ties the whole record together into one cohesive piece. “Waking Dream” flows so well into the next track, the title track, that it seems perfectly planned. In fact, by keeping the track sequence as fluid as it is, the album possesses a cinematic feel containing many peaks and valleys. “Soulbound” and “Legacy” also connect this storyline with last album Apex, as the former reintroduces the four sons of “The Matriarch,” while the latter name-drops the Apex album title.

The use of death metal growls from guitarists Truesdell and Kingsley on tracks “Return To Me,” “The Wind That Shapes The Land,” “Afterlife,” and “Soulbound” add a new, darker dimension to Unleash the Archers’ overall sound. “Faster Than Light” is a real banger, opening with a neo-classical riff, creating the whole basis to this track. It’s a straight up fiery power metal anthem in the vein of Stratovarius, DragonForce, Angra, and Rhapsody. This track will undoubtedly go down like gangbusters in the live setting. The duet with guitarist Andrew on “Carry the Flame,” with his clean and powerful melodic vocal lines combined with Brittney’s soaring harmonies, is a continuation of “Earth and Ashes” from Apex.

The retro style album artwork created by Adam Burke adds to the overall sci-fi/cinematic theme, while the crisp production was once again handled by legendary producer Jacob Hansen, which elevates the album to insurmountable heights. Abyss is the most complex, intricate, and intense Unleash the Archers album to date, decorated with mature musicianship and strong songwriting.

Ever since the release of Apex, Unleash the Archers has become a primo power metal powerhouse that has gained worldwide attention. And deservedly so, as Abyss is a continuation of what this Canadian quartet does best. ~ Kelley Simms