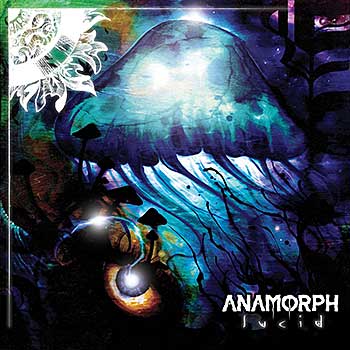 PROGRESSIVE INSTRU-METAL: In biology, Anamorph is the asexual reproductive form in the life cycle of fungus. In music, Anamorph is a highly skilled progressive instrumental metal band from North Carolina. Featuring guitarists Sean Parkinson and Cole Lohmann, drummer James Agusta and bassist Griffin Daniels, the band deftly morphs elements of prog rock, metal, tech death, math rock, post-rock, and other influences into one tight-knit package. However, there’s a lot to digest throughout the album’s 13 tracks and 57 minute runtime that at times is challenging to stay focused. With many layers running throughout each track, listening to them can be very laborious, especially if you’re not a musician or a fan of prog rock in general.

Album opener “Reverie” starts off elegantly enough with some vibrant reverb scales and prominent basslines, which create an ethereal vibe. The thrashy/djenty/proggy ambiance and the slow burning Rush-esque element buildup of “Myopia” is an entrancing example of the band’s heavy prog metal/rock mixed with experimental elements. “Hubris” and “Fading Azure” shows off the band’s deft skill in jazz metal, while “Feasting a Ravaged Earth” is an all-out tech death onslaught.

A notable downside to the album is that there’s not really any traditional guitar solos and rhythmic transitions that change the dynamic and flow of the compositions. Plus, 13 tracks at a 57 minute runtime is a little too much for an instrumental metal album to take in and some of the sections noodle on a little too much and sound too familiar.

However, the production is fucking huge, with every pristine note of every instrument screaming for attention without making a clutter. The band’s instrumentation instills drama and an anticipation of what’s going to happen next. Listening to strictly instrumental prog metal albums can be challenging, but even with its flaws, Anamorph’s Lucid makes it worthwhile. ~ Kelley Simms

SIX FEET UNDER: Nightmares of the Decomposed