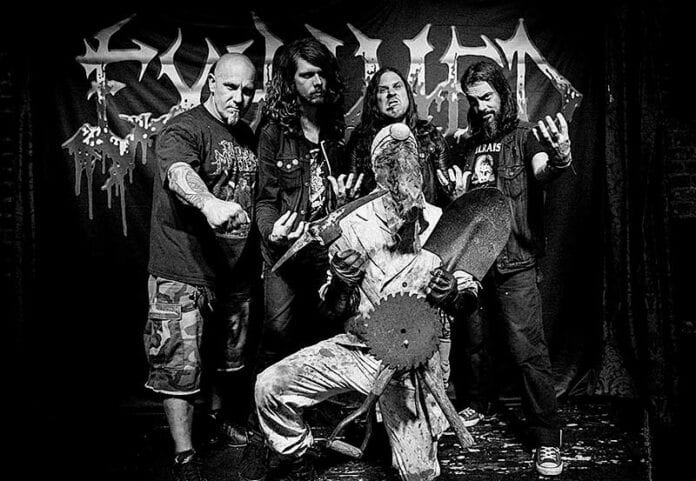 Outburn caught up quickly with Exhumed’s Matt Harvey, to discuss some of the cinematic inspiration behind their latest platter of splatter for Relapse Records, the succinctly titled Horror. We shot from the hip with a little rapid fire Q and A about some of Matt’s favorite (and least favorite) moments from the worlds of slashers, monsters, the unhinged, and the undead.

Where we you coming from lyrically for this record?
I just went back to the 90s, when we were finally starting to get better at playing, where we would just hang out after practice, get a pizza, beer, and rent all of these weird, shitty horror movies. It was remembering some of these movies, and those old trailer compilations like Mad Ron’s Prevues From Hell! I used to love that one, and used to put it on mute, listen to music, and watch that shit. There are a couple songs on this album that are inspired by those prevues, so the album is all tied up into that experience and vibe—going to the video store and record store, hanging out with your friends, eating shitty food, and drinking shitty beer. Having a laugh, watching the craziest, goriest shit imaginable!

Favorite VHS box art?
There was this movie that my parents would never rent for me. It was called Future-Kill and it had crazy H.R. Giger cover art. By the time I would’ve been old enough to go and rent the damn thing myself, that store closed, so I never got a chance to see the movie! I remember looking at that vividly and thinking it was so cool. I’ll never forget the art, it’s burned into my brain.

Favorite Italian horror film?
Whew, that’s tough. I’d have to go with The Beyond, because I love the music, and I just love how it ends, with them lost and just wandering. Some people are surprised that I like it when they finally watch it for themselves, but I just ask them how they would’ve felt at 13 watching it for the first time? Maybe it can’t be recaptured as an adult in 2019, who knows? I also love City of the Living Dead, as my close second favorite, because it’s so closely entwined with what I was listening to at the time. The inscription on the tombstone is on the back of Sodom’s Obsessed By Cruelty, and “Regurgitated Guts” was the song that inspired me to buy Scream Bloody Gore when I was a kid. Not only do I love the movie, it’s also tied in to so many other things I love, so it’s a close one, but I think The Beyond just edges it out. The soundtrack’s better!

Hammer or Universal?
I grew up with the Universal Monsters, so I’m more familiar with it. It wasn’t until much later that I got what the whole Hammer vibe was. I think I’d go more with Hammer now, because they have more hot chicks, so that would be my cop out answer! (laughs)

Slashers that you love?
I was never a big Halloween or Friday the 13th guy. When I think of slashers, I think more of the Dario Argento stuff, like Deep Red. There’s just something about the sleaze factor in his movies. It’s not as puritanical as the Friday the 13th movies that are basically telling teens not to have sex. There are no 80s morals in 70s Italy.

Do you have a favorite giant monster?
I do enjoy the Godzilla movies. I used to work at a comic store for years, and we used to rent all the Godzilla flicks. Ross [Sewage] our bass player and I have known each other since high school, and he was a customer at that store. We thought we’d be really clever and have a Godzilla movie marathon, and invited all these people over…who got really bored by the third movie! I think Ross’ mom tried to hang out to be the cool mom, and it just sort of put a downer vibe on the whole thing! (laughs) I did see the new one, though, and I liked it a lot. I like Ultraman a lot, as well!

What film do you feel more people should appreciate?
I saw The Witch, and that was one of the few modern horror movies that I really enjoyed. I have a lot of friends who are much more involved with current horror than I am, and it was a really weird thing, because it seemed that a lot of people were too cool for that movie, or something? I know a lot of people who liked it, but there were also others who were shitting on it, and I just thought they were trying too hard. It’s well shot, with a happy ending where the girl leaves her dickhead parents and flies off into the woods with the fucking devil! (laughs) I’m surprised not everyone was on board. I loved it.

Most overrated horror film?
I guess I was always a Nightmare on Elm Street guy, so I felt that Friday the 13th was overrated. It was one of those movies I watched with my friends to watch scantily clad women run around—that was the highlight for me. I didn’t really like the whole storyline with Jason’s mom. I like monsters or murderers to just be evil. I don’t need to know their motivations, because it just takes the wind out of their sails. You stop being afraid of them, and they just need a hug, or counseling, or whatever. That’s why I like zombies. There’s no motivation other than hunger. You can keep the evil feeling by tying it into the human experience.