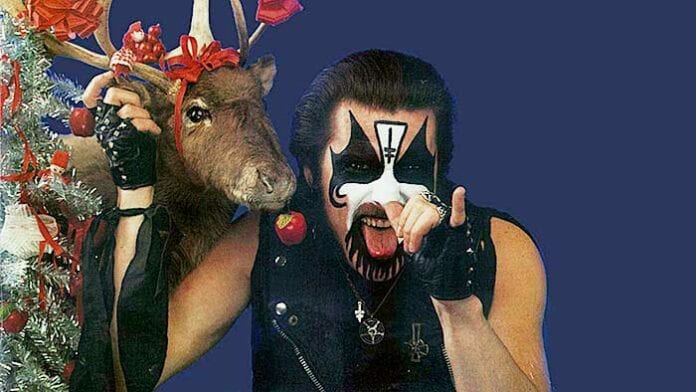 Maybe heavy metal music and Christmas don’t go hand in hand, but that hasn’t stopped some of the most prolific artists in the genre from creating some interesting tunes.

10. RAMONES: “Merry Christmas (I Don’t Want To Fight Tonight)”
Although not metal, the Ramones recorded their first Christmas song in 1987, released as a B-side to the single “I Wanna Live.” The boys deliver this holiday cheer with their trademark punk rock sneer.

9. VENOM: “Black Xmas”
Lead-off track from 1987’s Calm Before the Storm is certainly not the most popular of songs in the notorious band’s repertoire, but it does possess Venom’s trademark tongue-in-cheek evil charm.

8. LEMMY KILMISTER: “Run Run Rudolph”
One of 16 metalized Christmas songs from the 2008 We Wish You a Metal Xmas and a Headbanging New Year compilation features Motörhead’s late bassist/vocalist Lemmy along with ZZ Top’s Billy F. Gibbons on guitar and Foo Fighters’ Dave Grohl on drums.

7. LA Guns — “There Ain’t No Sanity Clause”
This snarling cover of The Damned is one of five tunes taken from LA glam rockers LA Guns’ digital EP Another Xmas In Hell album, featuring other covers of holiday classics by the Ramones, Slade, and Billy Squier.

5. TWISTED SISTER: “Oh Come All Ye Faithful”
This raucous and festive holiday classic is set to the exact rhythm and vocal delivery of the veteran New York cross-dressers’ biggest hit “We’re Not Going To Take It.”

1. KING DIAMOND: “No Presents For Christmas”
This 1985 single from Mercyful Fate banshee vocalist’s solo band is synonymous with Christmas. Perhaps it’s the most obvious of metal songs for the No. 1 spot, but it’s also the most well deserved.