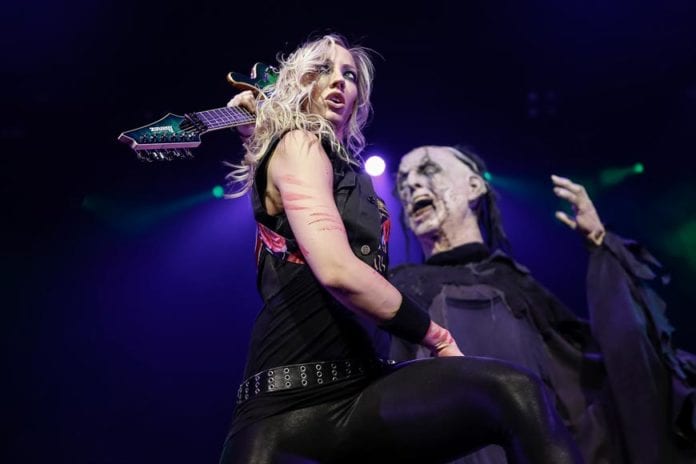 Nita…The Hurricane is unmistakable. Between shredding the stage with The Iron Maidens, Alice Cooper, her appearances with WWE, countless amazing tribute bands, and now her own solo record on the way, we felt it was time to ask this multifaceted and multitalented shredder what her favorite Halloween themed songs are. Having part of her career playing Halloween favorites with Alice Cooper, it’s no surprise her choices are as metal as you can imagine, but they might not be the songs you would expect. Check out what the queen of shred has chosen as her top Halloween songs, and, of course, listen to them below.

1. Alice Cooper “Man Behind the Mask”

I’m always so stoked when it gets to be near Halloween time, and we add “Man Behind the Mask” back into the Alice Cooper set. It adds a spooky and slightly campy element to an already spooky show! There used to actually be a part in our set where one of our shorter production assistants would come out dressed as a camper and ask Alice for directions, and at the end of the song a tech would come out dressed as Jason, throw her over his shoulder, and kidnap her.

I’ll shout my love for Helloween to anyone who will listen. I’ll blast this song at full volume year round. However, this time of year might be the only time it’s socially acceptable. Try listening to it and not yelling “AHHHH! It’s Helloween.”

This whole list could have been made up of Misfits songs actually, but I chose one that has special meaning to me. The first band I was ever in actually covered this! And, of course, perfect Halloween graveyard subject matter.

5. Ozzy Osbourne “Bark at the Moon”

The classic tale of a werewolf howling at the sinister moon. Who can’t relate?

This was a song that I liked musically before ever paying attention to the lyrics. When I finally checked out the lyrics, I still remember how macabre and chilling they were to read.

This was always one of my favorite songs to play when I was with the Iron Maidens. Hearing a crowd sing that guitar line in the intro from the stage is an incredible experience, even not being the real Iron Maiden! Definitely some awesomely dark and spooky lyrical content, too.

This was the first Deicide song I ever heard on a metal compilation album, and it made an instant fan out of me. I didn’t realize until much later that the lyrics were based on the classic horror movie The Evil Dead. Bonus points to anyone who remembers it in Grand Theft Auto Liberty City.

You can’t do a Halloween playlist without adding this King Diamond classic. Aside from the top-notch musicianship, the tale told in the Fatal Portraitalbum would be at home in any collection of horror stories.

It’s not rock or metal, but I couldn’t finish out a Halloween playlist without adding “Thriller” by Michael Jackson. Such a fun Halloween jam, and anyone who says they never tried to do that dance from the music video is a dirty liar.

Check out Nita’s video for Out Most Desperate Hour taken from her upcoming solo album Controlled Chaos out November 16th on Sumerian Records – and dont miss her on tour this fall – get the new album and stay up to date on all things Nita here: Official Nita Strauss Website