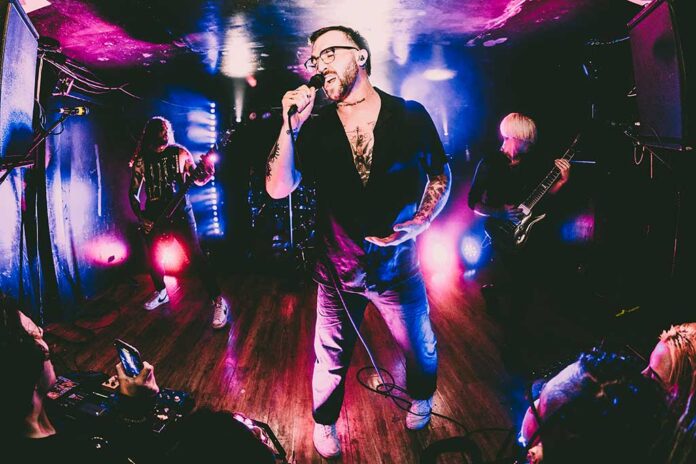 Most Tuesday nights are simple and uneventful, however Tuesday, June 14 was exciting for Hartford, Connecticut metal fans, as The Krewe Du Sang Tour featuring a lineup of VCTMS and Afterlife, and Louisiana’s own Cane Hill came to rock The Webster Underground.

It was VCTMS time to get the show going, and they were clearly up to the task. The Chicago group opened with “What Doesn’t Kill You,”and as the sirens sounded, the crowd filled with anticipation. VCTMS played with aggressive riffs and heavy drops shocking those in attendance with the intensity they were able to effortlessly bring to the stage. Vocalist John Matalone gave an impressive performance with his powerful and energetic screams. You could truly feel the spirit behind the music during their song “Hell Is Other People.”Their drummer Meredith Henderson hopped on her drum kit to close out their last song, dropping as soon as the beat did, a seamless and creative interaction.

Up next was Florida’s own Afterlife. The group had previously toured with Cane Hill on their first headlining tour and were thrilled to be back on the road with them. Their performance was heart-wrenching and emotional, as the themes behind songs such as “Broken Home”and “Part of Me” were based on vocalist Tyler Levenson’s personal battles with domestic abuse and his journey to find closure from all the trauma he has faced. The honest lyricism, both rapped and sung, mixed with the melodic rhythms allowed raw emotion to cover the audience, each relating to the message in their own personal ways. The group closed with “Giving Back the Pain,” one of Afterlife’s heavier songs about overcoming past trauma—a beautiful note to end on.

The moment everyone was waiting for had finally come. As the lights went dark, Louisiana’s own Cane Hill, Devin Clark (drums), Ryan Henriquez (bass) Elijah Barnett (guitar), and Elijah Witt (vocals) walked onto the stage and immediately began playing “Kill Me.”The fast paced drumming and wildly powerful guitar rhythms had fans off their feet and screaming with every ounce of energy they had. The specialty LED lighting used by the band perfectly matched not only the beat of the songs but the theme of the songs as well. During “Blood & Honey,” the lights split to half yellow/gold and half red to represent both blood and honey. The extra attention to detail was beyond impressive and made the entire performance that much more spectacular. Barnett’s performance was particularly remarkable, as he bent and flowed with each note in a hypnotizing fashion. Witt’s confidence while performing is unmatched. He sings with incredible strength, each word flowing beautifully after one another. Cane Hill’s music and lyrics are both the perfect balance of heavy and emotional, hitting a chord in fans unlike any other band.

The group even took a moment to celebrate Pride Month by bringing out a rainbow flag that said, “Love Is Love” and acknowledged how much more progressive the Northern United States is compared to the South where they are originally from. A beautiful gesture to show the love and acceptance they have for their fans no matter who they are or where they are from.

Cane Hill closed out their set with fan favorite “Too Far Gone” and suddenly guest vocalist Lauren Kashan of Sharptooth joined the band on stage to scream the chorus. Kashan was an incredible surprise for the fans and perfectly matched the band’s vocals while adding her own talented style into the mix. Though this was an exciting way to end the set, fans were begging for one more song and the band complied. Not only was the audience thrilled to keep the night going, but for old fans of the band the choice of “Time Bomb” off of Cane Hill’s self-titled 2015 release was an even bigger gift. The entire floor broke out into a mosh pit as fans could not contain their excitement while hearing a song that originally brought Cane Hill to the world’s attention. Cane Hill is without a doubt a do not miss band. The chemistry they have with one another as well as their fans is truly immaculate. There is nowhere but up for this group, and it will be a genuine thrill ride to see where they take their music next.