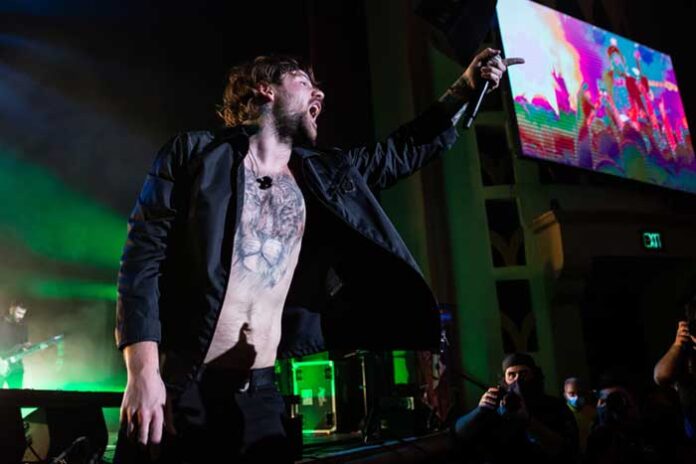 On April 3rd, Beartooth rocked the house at the San Jose Civic. The tour consisted of Erra, The Devil Wears Prada, Silverstein, and Beartooth. Unfortunately, Erra was unable to make it to the show due to issues with their van. Although this show had a smaller crowd, the fans made up for it in excitement and matched the bands’ energy throughout the night and made it seem like it was a much bigger crowd.

The show then opened up with The Devil Wears Prada with a great set full of classic songs like “Danger: Wildman,” “Chemical,” “Dez Moines,” “Sacrifice,” and “Dogs Can Grow Beards All Over.” As always, they were full of energy and great to watch.

Next up was Silverstein, a lot of fans were excited to see them and again made it seem like it was a packed house. They performed songs like “Vices,” “My Heroine,” “Ultaviolet,” and “Infinite.” During their set, singer Shane Told jumped down from the stage onto the floor speakers to be closer to fans and sing and interact with them.

Last to perform was Beartooth. During their first song they had an intro and confetti cannons go off with a screen that came down to reveal the band. They had a great energy, and the performance was a lot of fun to watch. They played a jam packed 17 song set list, including “Devastation,” “Hated,” “Bodybag,” “Beaten in Lips,” “Phantom Pain,” “Disease,” “In Between,” and “The Last Riff.” Overall, this was a great show with a great group of bands.