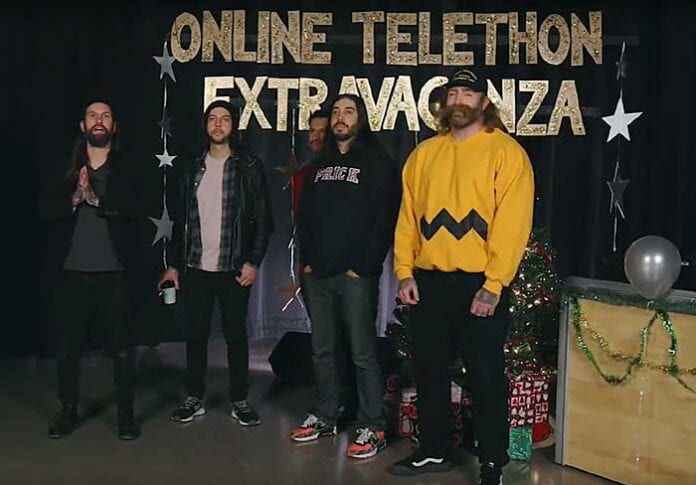 For Every Time I Die fans, this holiday season didn’t feel quite right knowing that the band would not be bringing their annual ‘Tid The Season “Shitmas” festival to their hometown of Buffalo, NY. It is a tradition that has taken place on December 15 every year since 2017, giving the date the distinguished title of “Every Time I Die” day. The event, attended by fans both far and local, saw a stacked bill that was both curated and headlined by the metalcore veterans themselves.

Fans were given something much different this year as the band delivered their annual holiday package as a one of a kind virtual event instead. With an unlikely and exciting parade of special guests, an extremely well scripted and produced storyline, pro-shot concert footage, and so many other surprises, “Every Time I Die’s Online Telethon Extravaganza to Raise $69 for the Members of Every Time I Die” was a raucous variety show that stood king among a year of virtual events.

The band states the obvious without actually outright saying it. While we all know bands and industry professionals have lost significant income this year, which throttled the boom of virtual performances, Every Time I Die coyly dodges outright sharing this depressing reality. Instead, they invent a silly and feel-good premise of the event that carries throughout the story. When “band manager” Biggie rings vocalist Keith Buckley to demand the band repay him the $69 that they charged to his account, he has no sympathy for the band’s current forced unemployment. After a lengthy and comical exchange over how to repay the funds (Andy Williams may be a wrestler, but he doesn’t share his money), the idea for a telethon is born. This isn’t your momma’s safe for network television ordeal, but rather one that is much more spicy and off-color. After all, would you expect any less from an event that features Andrew “Dice” Clay as one of the guests?

While this was set up to mimic the telethon format, complete with an actual number that plays back ETID songs when you call, money was raised through ticket and merch sales, including some unique gear made specially for the stream via Violent Gentlemen. The importance of the storyline is not lost here; this isn’t some half-baked idea that was sloppily thrown together, but rather something that was well scripted and clearly very meticulously thought out. This is a big credit to the team of writers and, of course, director and co-star Doug Spangenberg, whose help the band, erm, unenthusiastically settled for after being rejected by a slew of other choices. Spangenberg had previously directed the band’s 2006 documentary, so he was already well acquainted with their antics.

At first, when the list of guests was revealed, I genuinely could not tell if this was a joke or legitimate. But sure enough, the band was virtually joined by comedian Andrew Dice Clay, actor Gilbert Gottfried, Manchester Orchestra’s Andy Hall, Taking Back Sunday’s Andrew Lazzara, AEW wrestler Maxwell Jacob Friedman, The Gaslight Anthem’s Brian Fallon, Rick from Pawn Stars (well, sort of), and yes, even Sugar Ray’s Mark Mcgrath rallies for the band.

While this unlikely parade of guests appeared to want to help the band out, none showed up with the $69 the guys needed to get out of their jam. They didn’t all show up empty handed, though, as they each respectively came prepared with either a song, which all went tragically sideways for a multitude of reasons, a nugget of terrible advice (“keep a stiff upper lip”), straight up shinfo, or a good roast.

The list of bits rolls on. Andy Williams delivers awkward brick wall standup and some shinfo about an out of control 4th of July party. Jordan Buckley, Goose, and Steve auction off some bizarre merch during “Home Shopping.” And of course, the guys make plenty of dick jokes and laugh at their own expense (pun intended).

Alas, while there were plenty of zany sketches to fill out the time, the main event is of course a blistering performance from ETID themselves. Containing every bit of energy you would expect from the metalcore heroes, the performance was raw and yet so well produced. And while the band tore it up over the course of 12 and a half songs (more on that in a minute) like “Map Change,” “Wanderlust,” and “We’rewolf,” the guys had fun thinking outside the box with some others.

Before performing a brand new song, “AWOL,” the band teased the new cut in a gritty DIY shot from Andy’s mom’s garage. As the song played, they were interrupted, ultimately teasing the hell out of the band before they actually launched into a new one “for real this time.” One of the most creative takes was a polka reimagining and animated clip of “C++” as performed by “these idiots,” otherwise an ensemble of various brass, string, and percussion musicians.

After Andy Williams wrestled at last year’s festival, it’s now expected to be an annual feature. Not wanting to skip a year, Andy “The Butcher” along with “The Bunny” and “The Blade” planned an epic match (and stabbing?) to conclude the telethon, despite not having a ring. As for whether or not it went as planned, you’ll just have to find out.

As Every Time I Die concluded a searing performance of “The Coin Has a Say,” they checked in to see how well their efforts did. Well, they didn’t quite “fill the dick up with blood” and the turnout was “limp,” only raising a measly $16.35 because their fans (and Santa) are a bunch of jabronis. Well, boys, at least that was a dollar and 35 cents more than the cost of admission!

All jokes aside, it’s hard not to imagine that this stream didn’t at least reach its $69. This was well worth the $15 price of a ticket, in fact, the price seems low when the credits roll and you see just how many people had a hand in making this epic shitshow showdown a total success. While we’re all eager to see ETID perform live again at next year’s festival, one can’t help but low-key hope that more events of this nature are up the band’s sleeve.

Set list:
“Underwater Bimbos from Outer space”
“Romeo A Go-Go”
“Beers in Heaven” new song teaser
“Thirst”
“Map Change”
“AWOL” (the new song for real, this time)
“Floater”
“No Son of Mine”
“C++” as performed by these Idiots
“Wanderlust”
“Decaying with the Boys”
“We’rewolf” “The Coin Has a Say”