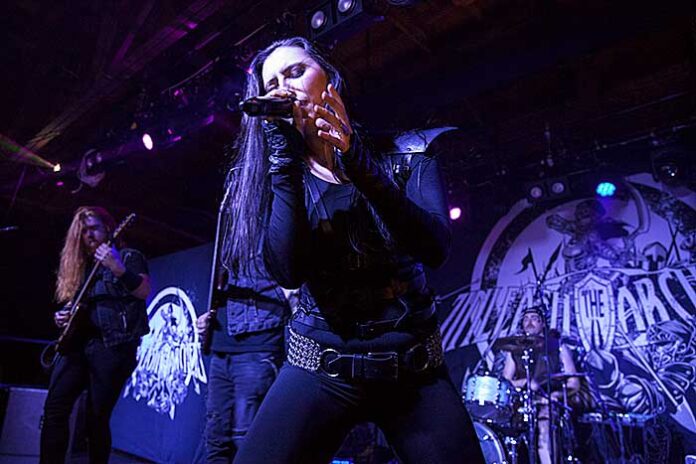 Hunting for a parking space, driving past the front door of the venue, and continuing to the end of the block, there was no end in sight to the line of enthusiastic fans waiting to get in on this Wednesday night. Once inside, a long Disneyland-like line had formed, so long that the crowd had to position themselves in a maze-like configuration in order to keep the doors accessible. This seemingly never-ending line of energized fans were cued up for the Unleash the Archers’ rnerch booth. Within a half an hour of being in this literal warehouse turned music venue, this level of excitement and pure, unadulterated joy was contagious and ignited a soaring level of passion from one person to the next. And the show had not even started.

The lights went down and the intro music, “Waking Dream,” started and all voices instantly turned into exuberant screaming for the band to begin. One by one the members of the Canadian power metal band walked on stage, with Andrew Kingsley and Grant Truesdell on guitars, Nick Miller on bass, Scott Buchanan on drums, and lead vocalist Brittney Slayes. With each entry onto the stage, the crowd grew louder, chanting “U-T-A!” The band opened with “Abyss,” to the absolute elation of the crowd. The set that followed was a mixture of new songs from their latest album, Abyss, and older fan favorites from Apex and Time Stands Still—“Through Stars,” “Legacy,” “Soulbound,” “Faster Than Light,” “The Matriarch,” “Cleanse the Bloodlines,” “Tonight We Ride,” “Awakening,” “Apex,” “The Wind That Shapes the Land,” “Afterlife,” with an encore of “Carry the Flame.”

Brittney Siayes’ vocals are what dreams are made of. A combination of operatic heart and melodic metal soul that fills the body with excitement. Andrew Kingsley and Grant Truesdell held the stage on the same level as Slayes, matching her hair twirling and headbanging, while meeting each other on a level very few bands are capable of as a whole. This band performs as a single unit, each member as prominent as the other, not allowing themselves to overshadow the others. They jumped on the amps and freely moved along the stage to engage each other and the audience in a way that made each person feel as if this were an intimate performance, despite being surrounded on all sides by a huge and overwhelming crowd. As the set progressed through the night, each members’ energy levels rose to match the increasing euphoria of the audience and the ever-growing and hastening mosh pit that filled the back half of the venue. There was not a single moment when those who were there were not fully engaged and invested in Unleash the Archers, not even in the silences between songs.