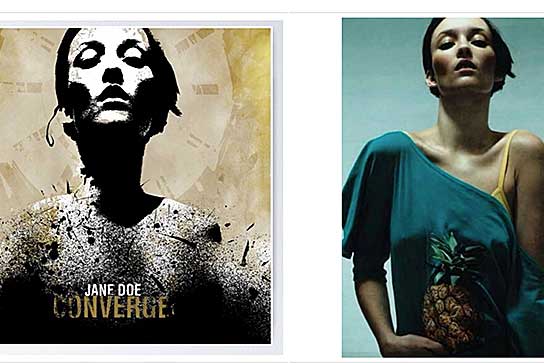 The iconic Jane Doe imagery has been out over 20 years now, thought to be an original work of art created inside the mind of Jacob Bannon, but Jane Doe has something to say. Actress Audrey Marnay posted a photo of herself published in Marie Claire only months before the now iconic Jane Doe artwork was revealed, created by Converge vocalist Jacob Bannon.

Jacob Bannon’s response via Converge’s Facebook page: “Just to be clear: This is definitely one of the sources for the original stencil/mixed media piece for the ‘Jane Doe’ album. Most of my work always been collaged cut/paste based (and still is). Hundreds of images were xeroxed and repainted/inked in a loose style to create the release artwork. This process is similar to everyone from Shepard Fairey to Francis Bacon. Over time my work has evolved into something more much more refined, but the roots will always be in this style. I wonder if folks will still insist that it is actually from the cover of Slayer’s Reign In Blood?

“The original goal was to create ghost-like forms that embodied the concept of ‘Jane Doe.’ In recreation identifiers are removed from physical forms, making all humans become relatable and stoic. We see what we want to see in them, and oftentimes, it’s a reflection back onto our own life experiences, etc.”

MACHINE HEAD Drop New Song & Video For “Do Or Die”