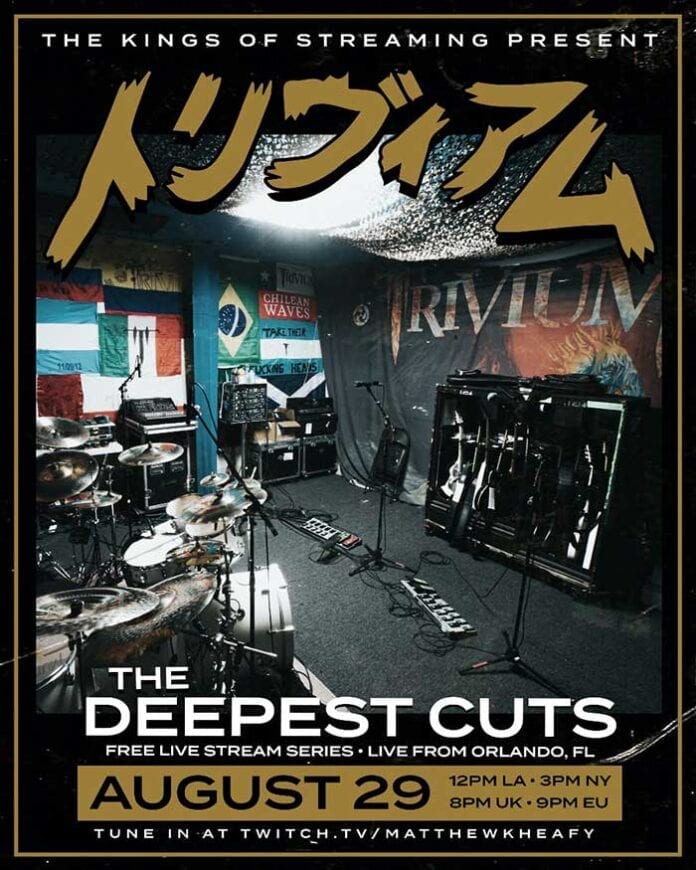 Grammy-nominated metal band TRIVIUM will follow up last month’s massively successful global concert event, “A Light Or A Distant Mirror,” which took place at Full Sail University, with another “can’t miss” performance. This show, dubbed “The Deepest Cuts,” will be markedly different from but just as thrilling as its predecessor.

On Saturday, August 29, at 3 PM ET, Trivium — the kings of streaming who’ve been embracing the art of the livestream for years — will play a free show that will stream on singer/guitarist Matt Heafy’s ever-popular Twitch channel. The performance will take place live from the band’s rehearsal space in Orlando, Florida.

In addition to a new and limited edition merch drop, the set will be filled with deep cuts that fans may never have seen live before. See the full set list below.

“So as some of you have probably picked up on over the last few days, we have been dropping hints about another streaming event and it turns out your suspicions were correct,” says bassist Paolo Gregoletto. “However, this is a much different event than ‘ALOADM.’ We are taking you into our jam room to give you a deep cuts Trivium set of songs that we rarely play and a few we have never played before. It will be totally free to watch on Matt’s twitch account. There will be some exclusive merch, too.”

He continues, “If you have ever wanted to be a fly on the wall for one of our practices, this is your chance. Get in the chat and talk to us and Trivium fans all over the world as we run through our most unique set ever.”

This is just the second in a series of live performances that Trivium have planned throughout 2020. Stay tuned for more information.

TRIVIUM “THE DEEPEST CUTS” SET LIST:
“Torn Between Scylla & Charybdis”
“No Way To Heal”
“Suffocating Sight”
“Like Callisto To A Star In Heaven”
“Detonation”
“The Revanchist”
“A Skyline Severance”
“Of Prometheus And The Crucifix”
“When All Light Dies”
“Ascendancy”
“To The Rats”
“Dusk Dismantled”
“Scattering The Ashes”
“Bending The Arc To Fear”
“The Ones We Leave Behind”

SABATON’s Heroes of the Great War EP Out Today