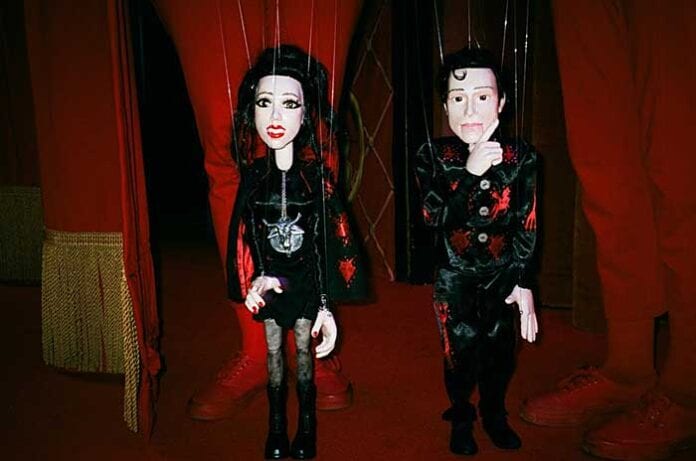 In keeping up with the vibes of the 1950s, the satanic doo-wop duo successfully transported the viewers from their living rooms into an authentic drive-in movie, complete with snack stands, commercials, and intermissions. A sassy horror hostess opens the show with a cabaret, channeling the essence of Vampira mixed with the wit of Joan Rivers in puppet form. Soon after, Alexandra and Zachary James appear, reminiscent of a modern day Morticia and Gomez Addams as they exchange romance and gallows humor. Upon being cursed by a black cat, their journey as marionettes with wooden bodies and permanent finger guns begins as they search for the devil to release them from this fate.

During each step of the journey, the duo encounters new obstacles and riddles. A seductive, burlesque dancing black cat, a coven of shimmying witches, and an army of neon skeletons led by Santa Muerta each respectively perform vignettes to three of Twin Temple’s iconic songs: “I’m Wicked,” “I Am a Witch,” and “Santa Muerte.” Finally, the pair finds their way back home, thinking it was all a dream until they realize the devil made good on his promise and brought them home.

From start to finish, the performance was just as unnerving as it was endearing, channeling the most crucial parts of the vintage horror aesthetic. It was clear that the band put a significant amount of thought and effort into the special, and it was well worth it. The storyline, production value, and cultural callback to the mid-century were spot on, but perhaps nothing was as striking as the detail of the marionettes and performance of the puppeteers. As the stream rolled on, the amount of support from fans was astronomical. The live chat was lighting up like a Christmas tree, with the band in tow, and many fans were tipping the band on top of the ticket and merch purchases… $6.66 seemed to be the preferred amount.

If you missed the stream, it unfortunately will not replay, however, you can still catch Twin Temple every Sunday as they celebrate their virtual black mass via TTV (Twin Templevision). Perhaps it won’t be as hauntingly whimsical as their Solstice special, but if there is one thing this band has proven, it is that they are among the elite in the virtual content game and will let nothing stop them from blessing their fans with incredible content.