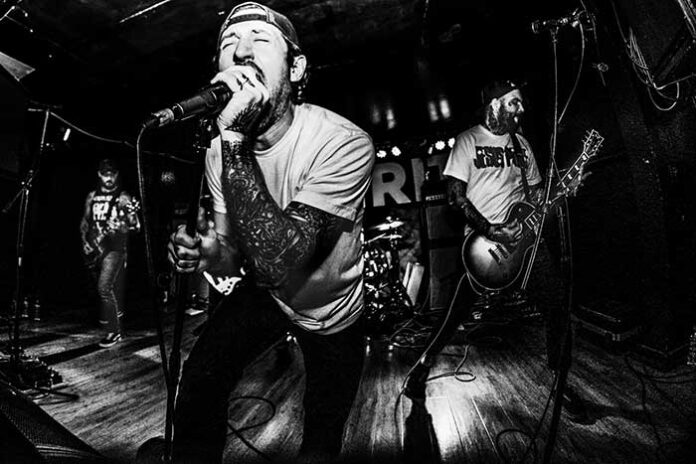 Friday the 13th is typically a day of superstitious bad luck. This May 13th, however, came with good luck, as Inspirit was playing its first show in Connecticut on its first tour ever. Inspirit’s members (previously Vanna) joined together on stage for the first time since 2007, when Vanna released its full-length album Curses. Vanna was a beloved New England band for many years, so to have the members reunited with new music and supported by an all New England band lineup made this night incredibly special for all in attendance.

Opening the show was Providence, Rhode Island’s own Dreamwell. This emotional post-scramz band brought a beautiful yet chaotic sound to the stage. Each member of the band poured their heart into their performance, exuding the passion they felt for each note played and every lyric sung. Lead vocalist Keziah “KZ” Staska was a fierce presence on the stage, singing with intense eye contact and extreme backbends as if the music was truly flowing through him.

Moving into a more energetic sound The World took the stage, while their vocalist, Matty Arsenault, took to the pit. He spent the quick but aggressive set interacting with the crowd and sharing the mic with multiple guest vocalists and fans. Impressively, the transition between the vocalists was smooth all while involved in a full room mosh pit. This fast-paced group just shy of being one year old gained the attention of the entire venue and momentum for the rest of the lineup.

Next to the stage was post-hardcore band Actor Observer. This Boston band uses raw vulnerability to connect with their fans and their personal experiences. Inspirit’s bassist Shawn Marquis (brother to Actor Observer’s vocalist) joined the band in playing their first song of the night, which made the crowd go wild. Emotionally charged energy filled the room as the crowd screamed along with vocalist Greg Marquis. The band played a new unreleased track “Man Enough,” which spoke on the toxic masculinity in today’s society. Also on the set list was crowd favorite “The Devil You Know” off of their 2018 album Pareidolia. Just before the set was over Chris Preece (vocalist of Inspirit) joined Marquis on stage, getting fans that much more excited for Inspirit.

It was finally the time everyone was waiting for. For the first time in 15 years Brandon Davis (drums), Shawn Marquis (bass), Evan Pharmakis (guitar), Nicholas Lambert (guitar), and Chris Preece (vocals) joined one another on stage for a new beginning. Inspirit opened with “The Alarm” off of Vanna’s 2007 album Curses, which sent the crowd into a frenzy. Fans pushed to the stage screaming their lungs out and even leapfrogged off one another to crowd surf and sing with Preece. The set list was a mix of songs from Inspirit’s EP Moon,such as their first released single “Fold” as well as “Holy Voltage” and “Drawing Down the Moon,” and songs from Vanna’s album Curses,such as “Surgical Tools” and “Magnetic Knives.”It was the perfect blend of the past mixed with the present, a truly incredible experience to witness how much this group has grown and developed their sound.

The joy on each members face showed how hard work and dedication pays off. Greg Marquis (of Actor Observer) joined Inspirit on stage towards the end of their set. The interchanging of vocalists throughout the night was extraordinary as it showed the family connection all of the musicians shared. The evening was truly a perfect example of the bliss that comes from living in the moment. Inspirit closed its set with “Drawing Down the Moon,” but were then quickly begged for one more song. Fans were thrilled when the band hopped back on stage and played “I Am the Wind, You Are the Feather” off of Vanna’s This Will Be Our Secret, which was released in 2005. This was an intimate, intense, and incredible evening for the New England Music scene and only the beginning of a tremendous career to come for Inspirit.