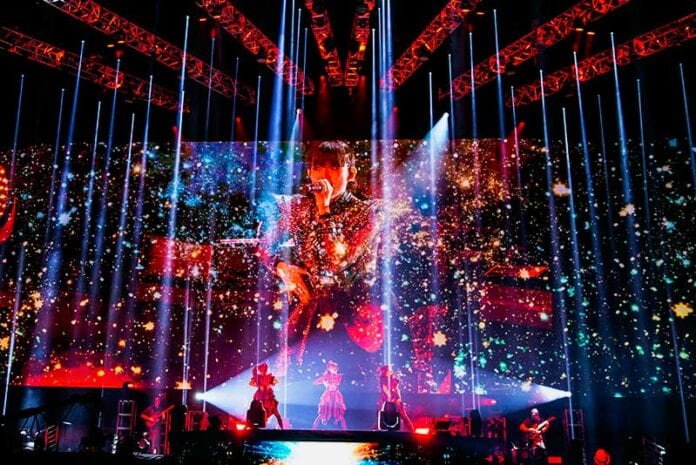 Lights, lasers, fire, fireworks, three Japanese women, and headbanging heavy metal…it must be none other than BABYMETAL! Launching the release of the band’s brand new album, Metal Galaxy, on October 11 with a sold out arena show at The Forum in the heart of Los Angeles, BABYMETAL put on an amazing and larger than life performance that had the crowd pumped up from beginning to end.

The show opened and closed with a tranquil video montage on the enormous screen that spanned the entire stage, with the band voicing over a ponderous musing about metal music and BABYMETAL conquering distant galaxies. But once the trio of women emerged like superheroes on a floating octagon stage, the entire arena was filled with heart pounding metal music, an uproarious audience, and anthemic, melodic vocals.

The backing band, all clad in black and wearing metal face masks, was incredibly tight, with every guitar crunch, thumping bass, and double kick drum shaking the seats and rafters. Swirling mosh pits broke out numerous times throughout the night on all three sides of the trio’s stage, which moved back and forth through the crowd, and multiple cameras swinging on large cranes captured the audience and BABYMETAL for the video screen above the band.

Of course, the stars of the show were the core members of vocalist Su-Metal and backup singer Moametal, along with a third dancer to nicely balance out the group, who certainly gave it their all. The vocals hovered above the thunderous music, and the energy that they brought to every song was electric, with synchronized dance moves and the trio dressed in matching shiny ornamented black dresses.

The big highlight of the show, of which every song felt like a highlight due to the varied stage production and performance, was “PA PA YA!!” off the new album, Metal Galaxy, with the stage and trio blasting off into space and the crowd fist-pumping and chanting along to the vocals during the entire song. If you want to merely watch what this was like, the band’s new video for “PA PA YA!!” captures it perfectly. However, if you want to experience an incredible night of ripping music, charming charisma, and non-stop adrenaline, then you must see the band live. BABYMETAL is built for arena shows.

Ending the performance with an encore of songs and a bang of fireworks, BABYMETAL brought together two extremes in one spectacular live show, and those in the crowd could be heard exclaiming, “That was the best show I have ever seen!” No argument here.