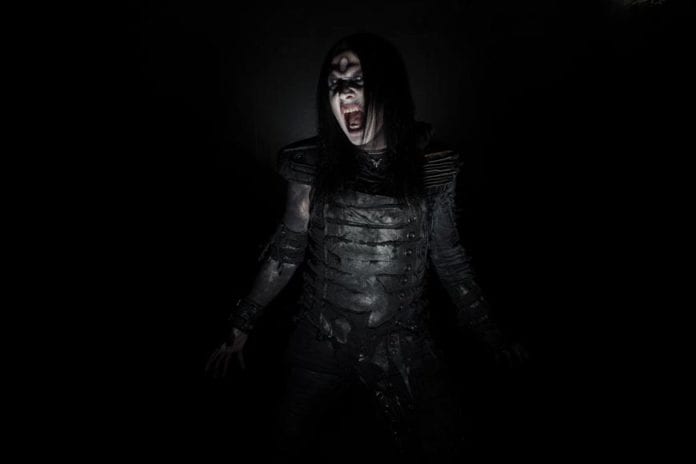 We caught up with the shock rocking king of horror to have him tell us what his Top 10 most metal moments in horror are. And here are some bloody excellent selections from Wednesday 13. (WARNING: GRAPHIC VIDEOS)

1. A NIGHTMARE ON ELM STREET

When I think of metal and horror, instantly I think of Freddy Krueger—his sharp metal finger blades scraping on the pipes in the boiler room. But nothing is more metal than watching a killer make his own weapon. The opening scene where Freddy is making the glove is pure metal magic.

Here is Freddy making his glove from Nightmare on Elm St.

Metal spheres flying around grinding into your forehead and sucking all the blood out. The ball is back. What an amazing metal killing machine.

Death by Phantasm, here is the killing machine at work. (warning graphic)

3. RETURN OF THE LIVING DEAD

This is my favorite zombie movie hands down. I’ve watched it more times than I can count. The most metal scene ever was watching them drive the pickaxe into the cadaver. “Brain it,” what a great quote. One of my favorite scenes in horror movie history.

How do you kill what is already dead? The famous pick axe scene in Return of the Living Dead. (warning graphic)

This is my favorite movie ever. There are so many metal moments in this movie, like when Leatherface hangs the girl on the hook. But I found the sliding metal door to reveal Leatherface for the first time was the scariest. When Leatherface hits the guy in the head, then drags him back in, and slams the metal door, that just took my breath away as a kid.

My second favorite horror movie next two part 1. The most metal moment in this film for me is watching Chop Top constantly dragging a metal coat hanger on the flash around the plate in his head. “Lick my plate you dog dick!”

The iconic introduction of Chop Top played by the amazing Bill Moseley with the incredible Caroline Williams as Stretch in Texas Chainsaw Massacre 2.

This is one of my favorite Fridayfilms. Jason always has a special way to kill people, but I really loved it when he smashed the girls face through the RV and the imprint of her face coming through the outside. To hear the metal breaking with her face was true metal.

Taking it up another notch here are ALL of the kill scenes from our friend Jason in part 6. (warning graphic)

This is one of the first films I remember seeing as a kid. I couldn’t understand why this black car was driving around murdering people for no reason. Truly terrifying and a four wheeled metal killing machine. At the end when it blows up, it makes a demon face in the fire. That was about as evil as it got to a 6-year-old kid in the 80s.

Here is a little clip from The Car doing what it does best… running you off the road and into your grave.

This film still gives me the creeps just like it did the first time. Jack Torrance with an axe at his side busting through the door, “Here’s Johnny!” That scene was great. But my favorite moment was the slow motion blood flood scene pouring out of the elevators. Just a flood of blood in silence with the soundtrack providing what you’re feeling inside.

Going up? The infamous elevator scene from The Shining (warning bloody)

There is nothing more metal than Hellraiser with Pinhead and his wretched hive of Cenobites. I can’t pick a favorite scene. This entire film is metal. These guys look like the ultimate metal band that uses real hooks instead of guitar hooks. Truly evil and brilliant.

The penultimate kill at the end of the first Hellraiser… bringing Frank back to where he belongs… in Hell. (warning graphic)

I couldn’t believe the blood and gore in Re-Animator. So many great scenes in this film, but the creepiest was when he sticks the needle in the severed head of Dr. Hill and he starts to move and talk. Truly creepy, and metal as fuck.

Dr. Hill coming back to life in The Bride of the Re-Animator. (warning graphic)

Check out Wednesday 13’s horror splattered album Condolences out now on Nuclear Blast Records. Here’s the video for the heavy horror anthem What the Night Brings.