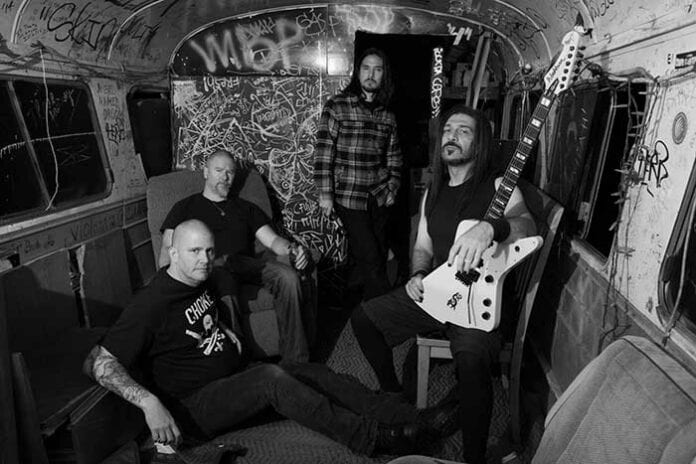 Point Blank – “Mean to your Queenie”
When you’re young and full of energy, you don’t question grooves that move you, you just move with them because they feel natural. The power and groove of the song will always be one of my favorites.
https://www.youtube.com/watch?v=86hkpxA5s1M

ZZ Top – “La Grange”
When this song kicks in after the clean guitar intro, it’s like a kick in the teeth. It gave me that same punch that only the mighty Van Halen was able to growing up. https://www.youtube.com/watch?v=Vppbdf-qtGU

Dead Horse – “Turn”
There’s no comparison to this band! They were way ahead of the game, and they were recklessly tight. If you ever saw them live, consider yourself lucky.
https://www.youtube.com/watch?v=BRejaE3SwD0

Watchtower – “Instruments of Random Murder”
Over the top always with preferred vocal style that ain’t for everybody, but musically still humbling.
https://www.youtube.com/watch?v=Puvj3V7OKDk

Rigor Mortis – “Die in Pain”
For a short time, we had an AM radio metal station in Texas called Zrock, and this is how I discovered the band and song, which was and still is one of my favorites.
https://www.youtube.com/watch?v=ktbPhGpfryA

Helstar – “Burning Star”
I remember being in a car with like 10 of my friends and this gets played on Houston’s top rock station at the time. And we’re thinking, “They’re from here?” Larry Barragan is one of the best in Texas!
https://www.youtube.com/watch?v=GzagA9gDWy8

King’s X – “King”
The first band I opened for right outta high school in Dallas. I remember thinking to myself, “What the fuck are they tuned to?” They were the first to use drop tunings, and their grooves were heavy and harmonies on point. Doug is a force that’s undeniable!
https://www.youtube.com/watch?v=f19FQfzly50

Verbal Abuse – “I Hate You”
Hardcore Punk growing up and from Houston? Well, thank you very much!
https://www.youtube.com/watch?v=IRjxHu7qLHQ

ZZ Top – “Tush”
I don’t know if I’d call this one of the heaviest songs I have ever heard, but this is one of the songs that marks the beginning for me. My sister had gotten Fandango! when it was new, and I was just five- years-old. That guitar tone in the opening riff cuts like no other! I can remember going to a hamburger joint we have here in New Orleans called Bud’s Broiler. They had a jukebox with this song on it, and I would pump nickels and dimes into it. “Tush” was always a go-to for me. I remember feeling really cool when people would hear that riff and looked shocked that a five-year-old was spinning it for them!
https://www.youtube.com/watch?v=-jB_QM73Slk

D.R.I. – “Argument Then War”
In late 1985, I had finally decided to stop hating punk rock simply because my brother loved it. Dealing with It was one of the albums that helped me transition from pure metal head into a metal punk. This album is gospel in my history, and “Argument Then War” crushes! It should be noted that the night I met and agreed to try out for the band that eventually became Exhorder, we were all at a D.R.I. show in New Orleans.
https://www.youtube.com/watch?v=wKD-8Ijgli8

Butthole Surfers – “Graveyard”
The Butthole Surfers was one of the first punk bands I had ever heard, and they really have always been a one of a kind thing. I always thought “Graveyard” was one of the best songs they had, but seeing them live in New Orleans at Tipitina’s solidified this one with me forever. They played in spite of a hurricane hitting New Orleans that day, and like a dumb 19-year-old, I drove through said hurricane to get there and again to get home. About 50 or so other people were as dumb as I was that night, and it’s fun to find someone all these years later that was also there on that hurricane night.
https://www.youtube.com/watch?v=pEI5VasZGwk

Dead Horse – “Scottish Hell”
I first heard this from an early demo of theirs from like 1988, and thought it was really fun, but kind of creepy. It starts out a bit silly lyrically, but the second verse is really killer. “I touched your lips, your eyes fell out / onto the floor behind the door / I picked them up and washed them off / and taped them back upon your face.” It just doesn’t get much better than that. After doing tons of shows with these guys in the late 80s and early 90s, I have to say that if you’ve never seen them live, then you’ve never heard “Scottish Hell” in its purest form. These guys are criminally underappreciated in the big picture, if you ask me. They were as good as anyone live and wrote great music.
https://www.youtube.com/watch?v=UFpqXVwOtTY