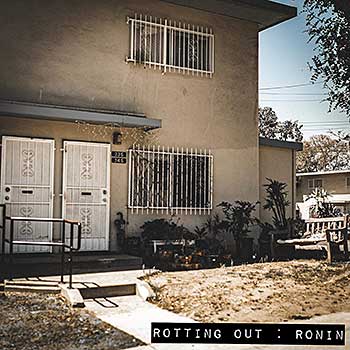 KILLER HARDCORE: Breaking their chains and coming in heavy is Rotting Out on their new record, Ronin. It’s been seven years since their first EP dropped, and since then, their hardcore sound has evolved and transformed from a few angry kids to a realized group of emotionally intelligent individuals. Coming from California’s South Bay, they were influenced by Pennywise, Suicidal Tendencies, and SoCal hardcore before starting to make their way in the industry. After a hiatus, Rotting Out returned to the studio to record this new record and re-cement their place in the hardcore canon.

This record kicks off with the track “Vessel,” a powerhouse opener that feels like a straight shot of electricity to the veins. With guttural grit, this track sets up the album for a vortex of power. The track “Stones” is a sure favorite for any Dead Kennedys fan and is reminiscent of the Cali hardcore punk from days past. “Stones’’ is a house show rager, and we can already envision the gymnastics in the pit. The finale, “Boy,” is where Rotting Out digs into their core and produces some killer material. If you play it loud enough, you could probably give yourself a bloody nose. This track is something you want to scream at the sky.

This record’s homage to the hardcore punk predecessors is evident and noteworthy. Walter Delgato’s vocals are on point throughout the whole album, with a tenacious growl that remains relentless. This record balances between thrashy tendencies and 2000s punk. If this record had been released in 2000, one of the tracks would have certainly made an appearance on Tony Hawk’s Pro Skater 2. ~ Konstantina Buhalis