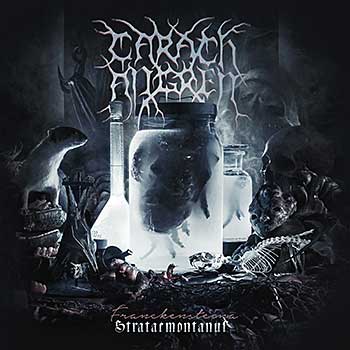 SYMPHONIC HORROR METAL: Dutch symphonic horror metal maestros, Carach Angren, are back on track with its most ambitious album to date, Franckensteina Strataemontanus via Season of Mist. Based on the mythos of the “real” Dr. Frankenstein—theologian, alchemist, and physician Johann Conrad Dippel—who served as the inspiration for Mary Shelly’s novel Frankenstein, Carach Angren’s conceptual story is darkly intriguing.

Carach Angren’s atypical approach to the black metal genre has always been theatrical and bombastic, and Franckensteina Strataemontanus further drives home the band’s demented concept. The main force of the band’s sound is the symphonic flurries and grandiose orchestral compositions of keyboardist Ardek. In addition, the operatic growls and sharp riffs of vocalist/guitarist Seregor are entrancing, while the relentless militaristic drum attack of Namtar strengthens the band’s sound.

After the one-plus minute spoken word narrative opener “Here in German Woodland,” all hell breaks loose with the first proper track, “Scourged Ghoul Undead.” The carnival-like atmosphere, swirling orchestral elements, and militaristic blastbeats ebb and flow throughout its five-plus minute runtime, keeping the listener on the edge of their seat in anticipation of what will unfurl next.

The pulsating title track is a riveting piece with catchy and memorable vocal lines, concluding in a menacing flurry. “The Necromancer” is propelled by heavy riffs and a slow grinding, groove based rhythm, while tracks “Sewn for Solitude” and “Operation Compass” continue the storyline of main protagonist Dippel’s experimentation with dead animals and other controversial acts. “Monster” furthers the gruesome tale with chilling, cinematic Omen-esque operatic background vocals, engulfing symphonic melodies, and a rapturous chorus. There’s a few cool industrial metal elements within the riffs on “Monster” and “The Necromancer,” while classical elements, including elegant keyboard work such as on tracks “Skull with a Forked Tongue” and “Like a Conscious Parasite I Roam,” are also well executed.

Throughout Franckensteina Strataemontanus’s 10 tracks, the musicianship is tight and precision-like, while the production is crisp and pristine, maybe even a bit too polished and processed in certain parts, but its cinematic appeal doesn’t go unnoticed.

One can argue that Carach Angren faltered just a bit on their last couple of albums, becoming a bit formulaic and predictable. Although this band hasn’t been as adventurous or brutal as their first three albums, there aren’t many other bands in this genre that can stir up chilling and delightfully frightening emotions as Carach Angren. Minor gripes aside, the band is undoubtedly back on track with Franckensteina Strataemontanus. ~ Kelley Simms