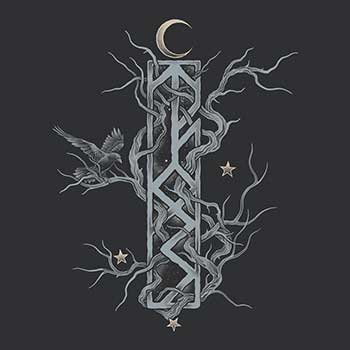 THE FLIGHT OF SLEIPNIR
Eventide

EXTREME METAL WITH A PAGAN AND BLACK METAL FRAMEWORK: It’s funny how some bands slip through the cracks. It’s been years since yours truly first heard the demo from Colorado’s The Flight of Sleipnir, and I recall being very impressed with what Wisdom Calls for Sacrifice had to offer within the world of pagan minded, atmospheric black/doom.

Fast-forward over a decade, and The Flight of Sleipnir has released a total of seven full-lengths during that span of time. Well, seventh time is the charm, apparently, as Eventide picks up where my love of the band’s material left off, only with a lot of catching up to do in the interim.

Not that a total education in this style is necessary to appreciate what The Flight of Sleipnir is doing here with Eventide, as the aim is clear: to create evocative and memorable extreme metal within the context of a pagan and black metal framework. The prerequisite influence of Bathory is ever-present, as is perhaps a smattering of Agalloch for good measure, but Americana as a whole seems to permeate the band’s creative psyche as well, making Eventide stand out in the best possible way.

Check out the slide guitar in “Bathe the Stone in Blood,” for example. There’s little about it that screams Scandinavian folklore, but rather it’s a heavy and doomy ode with an American approach, complete with a soulful lead break for good measure. This isn’t to say that the Scandinavian mythology that’s fueled The Flight of Sleipnir is missing from Eventide, far from it, but it comes with an execution that places the band leagues ahead of their contemporaries.

The clean vocals on “Harvest” also drive home this uniqueness with a confidence that parallels the songs’ ballad-like structure and efficiency. There’s little in the terms of “traditional” heaviness with this track, but rather a spacy-ness that’s been present within the band’s sound all the way back to their decision to cover Pink Floyd’s “Echoes” on their demo. Sure, some screaming shows up late in the game, but this is extreme metal in progressive rock clothing and in the best conceivable fashion.

Eventide is good. Incredibly good, in fact. It doesn’t matter whether you’re a veteran to The Flight of Sleipnir or someone just jumping into their catalog, this is grade A extreme metal that’s right up there with anything that’s been released thus far this year. ~ George Pacheco