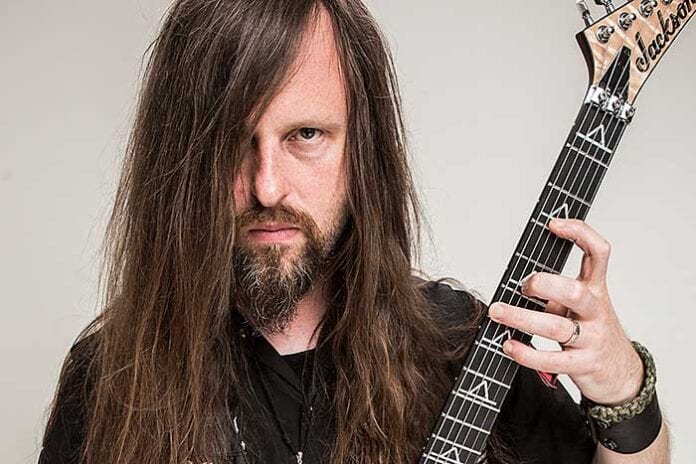 FROM NEWS 8 WTNH.COM
BY ASHLEY BAYLOR

(WTNH) — We are taking a look back at the death of a Connecticut music star that remains a mystery. Lead guitarist for the band “All That Remains”, 44-year-old Oliver ‘Oli’ Herbert, was found dead behind his Stafford Springs home two and a half years ago. His death has been labeled suspicious. We take an in-depth look at the case.

Herbert’s family and bandmates are still trying to come to grips with this immeasurable loss. They say it doesn’t seem real, even over two years later. While it has been incredibly tough, they’re still hoping someone will be held responsible.

“When I think about him, my fondest memories are being in Otis; swimming, boating.”

Cynthia LeFave remembers her older brother and the carefree summers they spent in the Berkshires as young kids. Little did she know, her brother, Oliver Herbert, would grow up to become a world-renowned guitarist, playing countless shows with his band, “All That Remains.”

LeFave: “He started with the piano…moved on to the trombone. I don’t know if anyone knows that, but he played trombone in the ninth grade marching band in our high school. After that, he moved into guitar. And he was obsessed–that’s all he did all day, every day was playing guitar.”

Mike Martin joined “All That Remains” in 2002. Before joining the band, Martin took guitar lessons from Herbert, and felt privileged to share the stage with his mentor for over 16 years.

Martin: “Oli, he was so engulfed in it, nothing else existed except for writing music.”

Herbert’s drive and passion eventually drew tens of thousands of fans as he toured all over the world, including many stops here in Connecticut–at the Oakdale Theater, the Webster Theater, and Toad’s Place.

His bandmates remember his awe-inspiring talent on stage and his subtle humor on the tour bus.  They say Herbert was an integral part of “All That Remains.”

Phil Labonte, another bandmate explained, “There was no one that worked harder at guitar and music theory and music than Oli Herbert.”

On October 6th, 2018, “All That Remains” headlined a show in Kuttawa, Kentucky. Sadly, it would be the last show they played with Herbert. Ten days later, Herbert was found dead behind his home in Stafford Springs.

Connecticut State Police and the Eastern District Major Crime Squad labeled his untimely death as ‘suspicious and the case is still active. But two and a half years later, no one has been named a suspect.

LeFave: “I found out because…the little brother of my best friend from high school sent me a Facebook message, and said ‘I’m really sorry about your brother.’  And I was like, ‘what do you mean, what are you talking about?’, so I started Googling and all these news stories came up and I couldn’t breathe.”

Martin: “Why am I getting texts that say ‘Oli’s dead?’ I could feel my heart go into my throat. The next morning, just waiting to hear that it’s not true. I was texting Oli, like, ‘dude just text me back, please.’ The next morning, they put it on the internet, and I was like, ‘I cannot believe this is real, like at all.’”

Speculation surrounding Herbert’s death started pouring in immediately. Shortly after his passing, his wife, Elizabeth Herbert, attempted to put the speculation to rest by posting on his official Facebook page.

She stated that Oli had drowned, and went on to say, “Oli was apparently self-treating for manic depression….antidepressants were found in his system, as well as a sleep aid.”

But Oli’s family and friends couldn’t imagine it was anything self-inflicted, arguing it wasn’t in his character.

LaFave: “He was very diligent about what he put in his body. He wasn’t a drug user. I do know that.  He wouldn’t put weird substances in his body.  But he wouldn’t even think to.”

Martin: “Definitely no drugs, at all. Even if he wanted to hide something like that, he wasn’t clever enough to hide that.”

According to our partners at The Hartford Courant, the state medical examiner ruled that he drowned in water, only a few inches deep, however, the cause of death remains “undetermined”.

After Herbert’s passing, his family and bandmates questioned the timing and circumstances of a will that surfaced with his alleged signature.

According to the Hartford Courant, his will was notarized at a car dealership in Hartford one week before he was found dead.

Labonte: “He wouldn’t think to get a will. There were times where we could barely get him to buy new shoes.”

After two and a half years, Cynthia, Phil, and Mike remain cautiously optimistic that in the end, there will be justice for Oli.

LeFave: “I have to have faith in the justice system. I hope they have enough evidence to convict the person who did this…if it happens this year, great, if it happens in five years, great.”

Martin: “Two and a half years later, still doesn’t feel real. Waiting to walk in here still–and that was his spot there–and ‘hey, get your guitar, I got this part.’”

Labonte: “I am really still mad at him, because he doesn’t have to be dead.

​​And there are thousands of people who want to see justice for Oli. At one point, members of the “Justice for Oli” Facebook group donated money for a billboard, requesting that anyone with information about Oli contact the Eastern District Major Crimes Squad.

If you know anything about this case, you still can contact Public Information at 860-685-8230.

State Police and the Chief State’s Attorney, Richard Colangelo, have declined to speak about the case since it is still an active investigation.

We also reached out to Elizabeth Herbert’s attorney, Anthony Spinella, for an interview, but she declined to speak with us.

FALLING IN REVERSE Shares Video for New Single “Voices in My...