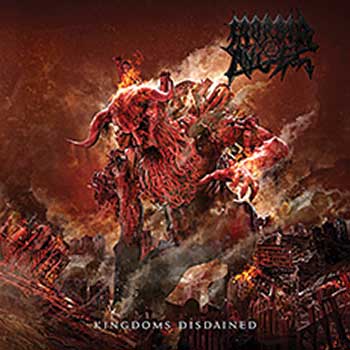 DEATH METAL: It’s a widely accepted fact that Morbid Angel’s Illud Divinum Insanus (2011) was lousy, and that’s probably one of the nicer terms you’ll see applied to it in print. While Kingdoms Disdained may not live up to the standard some of their peers set in 2017, it does do away with the shitty Marilyn Manson-esque kick they went on, and it’s safe to say that this is a decent return to form that focuses on doing what the Floridians have always done best. With vocalist/bassist David Vincent out and Steve Tucker—who first replaced him before 1998’s Formulas Fatal to the Flesh—back in, there is definitely some throwback to the sound of that era, but it has an armored veneer and dynamism to it that roots it very much in the present. Keeping with the MO of their older records, while they have murder in mind from start to finish, they are aware that there are numerous methods in which to kill, and the whole thing is uglier than hell. Opener “Piles of Little Arms” and “For No Master” spill blood through the frenzy, while the mutant, pulsating rumblings of “Declaring New Law” bore their way through bone with a more insidious edge, the same going for the lurching, punch-drunk “Paradigms Warped.” And with Tucker in fine voice throughout, they have at least started to atone for past sins. ~ Dan Slessor