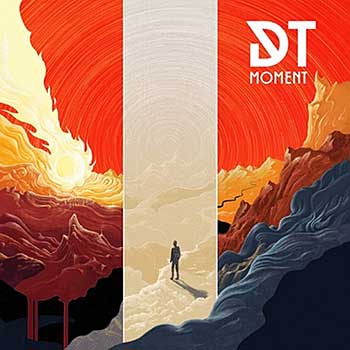 SWEDISH MELODIC DEATH METAL: When guitarist, co-founding member, and songwriting engine Niklas Sundin announced his departure from these melodic Swedish death metal legends earlier this year, nerves must have experienced a temporary fraying. Not a surprising reaction when your guitarist, co-founding member, and songwriting engine walks after almost 30 years. Luckily, two gold standard shredders were available and willing to step in—enter Christopher Amott (ex-Arch Enemy) and Johan Reinholdz (Nonexist, ex-Skyfire) who, despite the impressive pedigree and canon provided by the outgoing/on hiatus Sundin, has elevated Dark Tranquillity’s six-string aptitude to the greatest heights of its long existence. And on Moment, the band’s twelfth full-length, the new guitar tandem lives up to expectation with the delivery of traditionally smooth and sumptuous melodi-death riffing as well as spectacular leads that often steal the show on their own.

Taking advantage of the new axe slingers’ prowess, songs like opener “Phantom Days,” “Identical to None,” and “A Drawn Out Exit” are rife with harmonic minor galloping, layered melodies over grandiose and sustained progressions, and solos that fret watchers everywhere will be begging for transcriptions and YouTube playthroughs of. The interplay between Amott and Reinholdz advantageously allows keyboardist Martin Brändström to wield a broader palette and use a wide scope of traditional swells, understated prog rock spacey-ness, and borderline new wave sequences (see the intro to “The Dark Unbroken”) alongside straight up ivory tinkling and bleepin’ ‘n’ bloopin’ electronica in the enhancement of the tracks.

While the guitarists have brought an appreciable amount of fresh blood to this latest configuration of Dark Tranquillity, vocalist Mikael Stanne and some of the songwriting decisions remain weak links. Throughout, the frontman’s dirty vocals sound like he’s got a ball of phlegm trapped in his esophagus—and not in a good way—while his clean voice poses as an uncomfortable mismatch for the material he croons over, with the rollicking “Standstill” being a prime example of how his high-forehead baritone detracts from the song’s momentum. “Ego Deception” and “Eyes of the World” both make questionable dynamic swings where the wispy and ethereal choruses of each stall the forward motion provided by the quick chord changes and staccato runs of the main riffs—a discouraging case of one step forward, two steps back. Also leeching from the album’s overall impact are depressingly milquetoast ballads like “Remain in the Unknown” and “In Truth Divided” that flatline without any of the powerful emotional climax that should accompany heavy metal’s exploration of the subdued.

Still, Dark Tranquillity is able to pull Moment from the fire during the record’s final quarter with old school ripper “Failstate” and “Empires Lost to Time,” which practically takes the listener through the history of Gothenburg metal, but also serves to make the aforementioned missteps stand out that much more. ~ Kevin Stewart-Panko