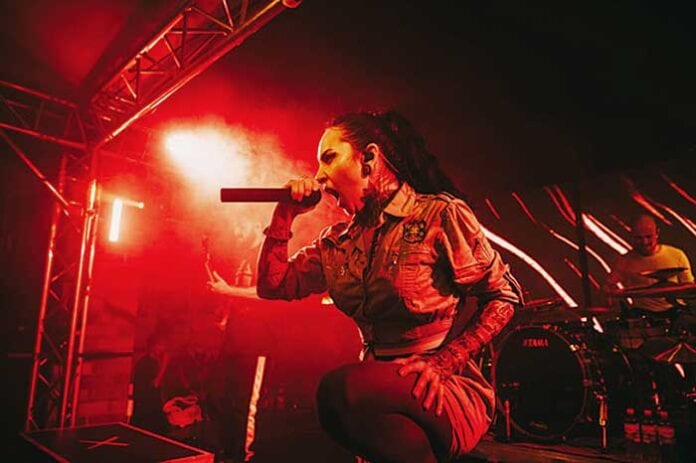 Ukrainian metal band Jinjer has been riding a nonstop bullet train since its 2009 formation. The band’s status has been surging, especially with the help of its 2019 full-length album, Macro. Consisting of vocalist Tatiana Shmayluk, guitarist Roman Ibramkhalilov, bassist Eugene Abdukhanov, and drummer Vladislav Ulasevich, the quartet has become a well traveled band.

During a recent phone interview from her home in Kiev, the charming introvert, Ms. Shmayluk, spoke with us about Jinjer’s new live album, Alive in Melbourne, the band’s early days, the friendship between its band members, and several other interesting topics.

Since March, with all the cancellations, lockdowns, and social distancing, what have you been doing to occupy your time or channel you’re creativity? How have you kept yourself from becoming bored?
I’m never bored when I’m with myself. I just talk to myself. I’ll make jokes and then we’ll laugh together! (laughs) Me, myself, and I. I’m an introvert, so for me that’s okay to stay inside just doing nothing. It’s my favorite thing to do. I spent six months in California during the lockdown because I was stuck there. All the borders were shut down and I couldn’t return to the Ukraine. I came back to Kiev at the end of August. Since I came back here to Kiev, we’re trying to stay busy with the band. First of all, we had a tiny Micro tour in Germany and Switzerland at the end of September. We played six shows, social distancing shows. That was fun. Although it was a tiny tour, it was a big thing for us and I hope for all the fans that came to see us after such a big pause. Then I moved out of my old apartment into my new one, just packing and unpacking. So, there’s no time for being lazy.

“I’M AN INTROVERT, SO FOR ME THAT’S OKAY TO STAY INSIDE JUST DOING NOTHING. IT’S MY FAVORITE THING TO DO.”

Just before the shutdown, you recorded the new live album in Australia. But did you know that it would become the live album beforehand?
We have this tradition that when we go to a new country or even a new continent, we always try to record and film our live shows just to have it and then maybe making something out of it. Like in this case, we got a proposition from Australian video guys and we hired them. It wasn’t planned in the first place, we just decided to make it a big thing.

Will this also be packaged as a proper DVD? Because the video of “Teacher, Teacher!” looks like a well filmed concert.
You know what? I haven’t seen the video and I haven’t listened to the recording yet. So, I don’t know. For me, it’s a surprise. I’m at the same level as other people right now, our fans. I think I’m going to watch it together with everyone else and be surprised. Because right now I have no idea what we’re talking about. I cannot judge because for me, it’s still a surprise.

“I HAVEN’T SEEN THE VIDEO AND I HAVEN’T LISTENED TO THE RECORDING YET. SO, I DON’T KNOW. FOR ME, IT’S A SURPRISE.”

Well, let me tell you, you look and sound amazing!
(laughs) Thank you! I’m going to celebrate it together with fans.

The crowd reaction throughout the album is electric. How are you able to read a crowd and decide what you’ll say in between songs? Is it just spontaneous and in the moment?
Sometimes, yes. I have a hard time talking in between songs, because obviously English isn’t my native language and it takes a lot of time to figure out what I want to say. During concerts, it’s not what you want to do—standing there and thinking about every word that you want to say. Also, you have to be really careful with words as to not to offend someone. I just prefer to play music and dedicate this time, not to talking, but to playing as many songs as we can and not to waste time. Sometimes I don’t talk. Or, sometimes I talk too much, if I feel like it. If I’m there for the 10th or 12th time in the same venue with the same people or same crowd, I feel like I’m home with my friends.

Jinjer has gained so much momentum in the music world. It’s been amazing to see the band grow into what it is today. In the early days when the band first formed in the Ukraine, was it difficult getting rehearsal space or playing gigs? It seems like Ukraine is another planet way over there in the Eastern part of the world.
I know perfectly what you mean. It is hard to break all the borders to become known as an international band. In those early days, we started this band as a hobby, just to spend time in a fun way. We hoped for the best, but at the same time we thought it might never work, so let’s enjoy it. It wasn’t really hard to find a room to practice because we had a lot of friends and there were a lot of musicians, but not the same level of interest—they did it for themselves and nothing serious. We rented a lot of rooms, it was easy. The hardest part was starting touring outside of the Ukraine.

It seems like you, Roman, Eugene, and Vladislav are one happy family. What’s the camaraderie and musical chemistry like between the band members?
What really helped was the situation and the times we spent together. One and a half years in 2013–14 when we moved from our native town to the opposite side of the Ukraine, when the war shit started, we moved and lived together under one roof, and that’s how we became family. It’s more than friends at this point. It’s a brotherhood and sisterhood. Right now we are inseparable. We found each other, and it seems like the situation is really stable. Every member seems to stay here forever. We don’t feel like someone is about to leave. Everyone is determined to stay.

“IT’S MORE THAN FRIENDS AT THIS POINT. IT’S A BROTHERHOOD AND SISTERHOOD. RIGHT NOW WE ARE INSEPARABLE.”

With the uncertain future of touring due to Covid-19, what will you be focusing on going forward?
There’s not much we can do right now. As you can notice throughout the internet, a lot of musicians exist only online doing all the streams and Q&As and starting doing the Patreon stuff to make some money for a living and not to be forgotten. The only thing we can do right now is to make new music. We already filmed a new music video for “The Prophecy” and we’re going to shoot another music video. We’re going to work on a new album that’s hopefully going to be released by the end of 2021. So, we have a lot of stuff to do. By then I think everything will work fine for the music industry.

THE CROW: 25 YEARS of FEAR AND BULLETS with JOHN BERGIN