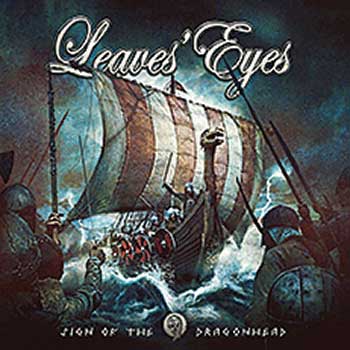 SYMPHONIC METAL: Sign of the Dragonhead is the seventh album from symphonic metallers Leaves’ Eyes and the first with Elina Siirala on clean singing duty. Granted, longtime fans of Leaves’ Eyes have had time to adjust, as the band released rerecorded versions of older material with Siirala behind the mic. Still, Sign of the Dragonhead is an opportunity for Leaves’ Eyes to redefine or at least reassert themselves. That happens, and there are some good melodies and compositions along the way, but there is a stylistic space left by Liv Kristine’s absence. Siirala is technically gifted—see the bouncy “Across the Sea” and the ballad “Fairer than the Sun”—but she has yet to distinguish herself from her predecessor. Thankfully, founding guitarist Thorsten Bauer has the songwriting skills to craft beautiful, moving pieces of music. He carries the weight of Leaves’ Eyes on his back for the duration of Sign of the Dragonhead, despite only getting a handful of ragers like “Shadows in the Night” and “Fires in the North.” Growler and producer Alexander Krull does a commendable job crafting a crystal clear album, even if the guitars are mixed too low. There are signs of hope on Sign of the Dragonhead. “Riders on the Wind” and the epic closer “Waves of Euphoria” prove that there’s still life left in Leaves’ Eyes. ~ Nick DeMarino