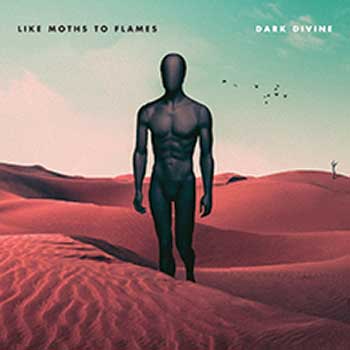 METALCORE HARD ROCK: Loud and relentless in nature, Like Moths to Flames enforces sharp hits and waves of rigid screams on their fourth album, Dark Divine, like an echo of old habits. For some, this will seem familiar in nature. For others, a stream of past tendencies turned new in experience and sound. Dark Divine sees the Ohio outfit inhabit their metalcore roots and employ contemporary rock attributes with the recruit of Caleb Shomo (Beartooth) for mixing. The album single “Shallow Truths for Shallow Minds” prioritizes crushing guitar wails and the infectious desire to headbang. By the tail end, a breakdown emerges and sets off an outbreak of monumental noise and oppressed rage. With overdriven builds and lush instrumentation, Like Moths to Flames frontman Chris Roetter draws emotion from worn memories, personal relationships, and the will to move forward. On songs like “Mischief Managed” and “Even God Has a Hell,” he revisits the past and makes way for a gleaming present. “I won’t go out quietly,” Roetter assures listeners on the rock generous opener “New Plagues.” On Dark Divine, Like Moths to Flames has reignited the haunting spark and building force that consumes their ever growing identity. ~ Danielle Deschamps