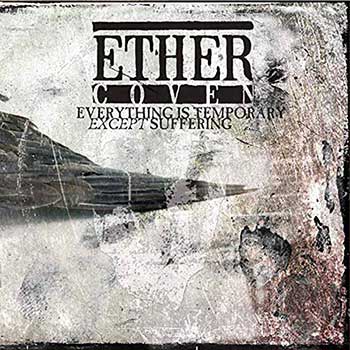 ETHER COVEN
Everything Is Temporary Except Suffering

DYNAMIC SLUDGE: As the old saying goes, you only get one chance to make a first impression, and what better first impression could you possibly make than a slow burning, 11 minute sludge metal opus? Such is the case with “This House Is a Tomb of Memories,” the opening grenade of Everything Is Temporary Except Suffering, the debut album from Ether Coven, an outfit fronted by former Remembering Never throat Peter Kowlasky.

The 11 minute opening track is merely a harbinger of things to come, as Everything Is Temporary Except Suffering clocks in at nearly an hour spanning only nine tracks. After “Flower Crown” quickens the album’s pace a bit with truly menacing tones, the monolithic “As the Noose of the Ever Changing World Tightens Around Your Neck” grabs you by the throat and refuses to let go for the next 11 minutes. Ethereal strings and clean vocals lull you into a false sense of security before Kowlasky’s guttural wails drop like Thor’s hammer as the track ebbs and flows from light to dark for most of its duration, making for a true standout of Everything Is Temporary Except Suffering. Ether Cove does its best Between the Buried and Me impression on “Of Bitterness and Shame,” which starts out more ‘core than anything before transitioning to death and doom after a brief instrumental interlude. The acoustic “House of Strangers” is an emotional tapestry of faint cords and dissonant guitar plucks, “The Burden of Loss” serves as a proper interlude before “Enjoy Life” delivers literally everything but the kitchen sink over the course of its 13 minutes, and the closing “Unravel” is just that—a sonic unraveling of Kowlasky’s psyche as he smatters his inner demons for all of us to see.

Just as Ether Coven is “more than a mere doom metal band” (their words, not mine), Everything Is Temporary Except Suffering is so much more than a sludge metal album. This record is emotional, captivating, and powerful, and while that particular trio of adjectives describes most of Peter Kowlasky’s career, they perhaps ring no truer than with Everything Is Temporary Except Suffering, an early contender for Album of the Year. ~ Brian Campbell