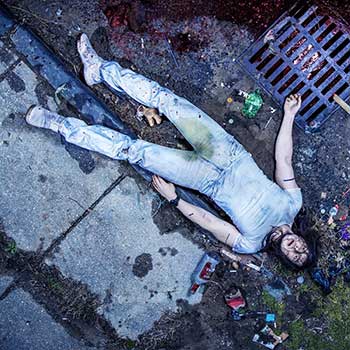 GRAND SOIREE ROCK: Some of the more crushing defeats of the ageing process have to do with creaky joints, expanding waistlines, and dysfunctional bodily processes. But what advancing chronology fucks with first, and hardest, is partying—type of, ability to, rigorousness of, and ability to recover from. As alcohol tolerance, the ability to jump off of roofs into swimming pools and cram fists full of Doritos into one’s gob are lessened by common sense, maturity, and the body’s capabilities, the landscape of what a party means in one’s 30s, 40s, and beyond is vastly different than the three nights a week minimum of roughhousing, booze pounding, property destruction, and copulating with anything that moves many of us pulled off in our teens and 20s.

When Andrew Wilkes-Krier first burst onto the broader scene with I Get Wet back in 2001, it was all about life as a brash, unhinged, non-stop rager where everyone was armed with a red plastic drink cup, had toothy grin slapped on their faces, and vomit (or blood) dripping from their chins. And Wilkes-Krier provided the appropriate feel-good soundtrack. Twenty years down the line, as livers become wrecked, hangovers become harder to deal with, and the world has submerged into a more divided and darkened cesspool, the ravages of time and cynicism have certainly changed the soundtrack to the changing party. Granted, there have been four albums between his debut and God Is Partying, and Andrew W.K.’s musical history is chameleonic, but the air here is one of increased contemplation and maturity, even if the general message remains the same.

That’s also not to say, Andrew W.K. has gone completely turned towards early 80s miserable Midlands goth, but there’s a darker mood to his charisma and choruses. Album opener “Everybody Sins” summons the morose sweetness of Scorpions’ “Wind of Change” and adds on even more handwringing grandiosity. There may be a strained roughness to his show tune vocals in “Babylon,” but guitar and keyboard angularity inject the song with a triumphant glow. “No One to Know” and “Remember Your Oath” both reek of a combination of old K-Tel commercials, overproduced 80s power ballads, and a couple frolicking on the beach scene from an episode of Knight Rider. Overall, this grouping of songs conjures up images of the sort of shindig that has a grand piano as a centerpiece and the “c’mon, give us a song” crowd cajoling Wilkes-Krier into sitting down and tinkling out soulful piano rock.

On the opposite end are those tracks that fall into weird self-indulgent purgatory. “Stay True to Your Heart” is a fine sentiment, but sounds designed to tap into Twenty One Pilots’ electronica lite and their fan base. “I’m in Heaven” is a plodding mix of Prong and Rammstein that unfortunately doesn’t live up to the excitement of that advance billing because it doesn’t really go anywhere. The unifying thread for all of the above—good and not so good songs —is that they are exultant and celebratory with the common denominator being that the party has shifted from people dangling from ceiling fans and hugging the porcelain throne to erudite discussions of political theory, the attendees’ 401k status, and people working the room asking if anyone knows a good divorce lawyer. ~ Kevin Stewart-Panko