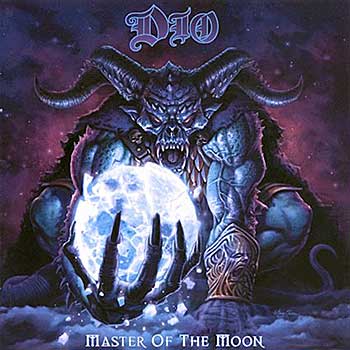 DIO
Master of the Moon (Reissue)

Ronnie James Dio’s 10th and final solo studio album obviously wasn’t intended as such. Although he rejoined his former bandmates from Black Sabbath for an album and tour as Heaven and Hell after this, he meant to record sequels to the Magica album. Stomach cancer ended his life before he could do that. After two excellent comeback albums, Masterof the Moon (2004) feels like a bit of a letdown. It’s not outright unpleasant like some of his 90s work. Nothing really sticks, though. That’s because too many midtempo numbers make the tunes blend together after standout opener “One More for the Road.” The individual songs (especially the title track and the creepy “The Eyes”) work, but the sequencing feels repetitive. The bonus material consists of live tracks from the accompanying tour, which find him and his band in fine form, and the Japanese bonus track “Prisoner of Paradise.” Fun extras, but nothing essential. As with all the releases in this lineup, the remastering and reissuing has been done with care. The album itself just falls somewhere in the middle of his discography. On the bright side, he had a fitting finale with the excellent Heaven and Hell record, The Devil You Know. It’s just too bad he couldn’t retire his eponymous act with more of a bang. ~ Jeff Treppel