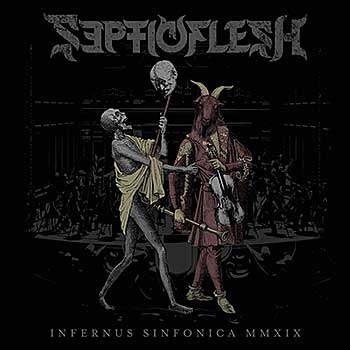 CRUSHING LIVE METAL WITH SYMPHONY: Septicflesh’s groundbreaking Infernus Sinfonica MMXIX show was performed in Mexico City at the Metropolitan Theater. The concert not only included a 100 piece symphony, but is also the largest production of its kind at the venue. The symphony features members from the Symphonic Experience Orchestra, the Enharmonía Vocalis Choir, and the National University of Mexico Children’s and Youth Choir.

The symphony and choir opens up the show with a simple yet dark melody, with the crowd cheering and chanting. Septicflesh enters the stage, and the symphony starts thundering into an intense piece that leads to “Portrait of a Headless Man.” The orchestrations make classic Septicflesh songs more powerful, but the music doesn’t sound drastically different. Septicflesh has always had orchestral elements in the band’s music, but this symphony didn’t add anything new, sticks to the songs, and adds emphasis when it works.

With the next song, they go back in their discography with “Prototype” from Titan. It’s one of the craziest songs on the album, and hearing the loud horns, the choir, and other orchestrations makes the song even more intense.

Going into the Septicflesh album, The Great Mass, the violins at the beginning of “Pyramid God” are immediately exciting. This is one of the strongest and most recognizable songs off the album, but the live guitars sound noticeably different than the studio version of the track, This live version of this song is absolutely crushing, and the orchestrations will send chills down your spine.

The next song is “Enemy of Truth.” Septicflesh could have chosen a gentler song after “Pyramid God,” but instead, they attack you with “Enemy of Truth.” The live version of this song is much more striking. It’s like you can feel every note in your blood. The orchestrations are also more intense than in the recording, and overall sounds amazing.

Septicflesh then finally plays something off our favorite album, Communion, and what better song to perform than the title track “Communion.” The choir sings over some of the fastest blastbeats you’ll ever hear. The orchestrations make this song sound larger than life, even the part with the oboes and violins are the evilest thing we’ve ever heard.

The next song is another one off of The Great Mass—“The Vampire of Nazareth.” All Septicflesh fans will recognize that clean singing at the beginning that leads to a crazy drum intro. This song stands out because it’s destructive, but the orchestrations and choir really make it sound sinister. It creates an eerie atmosphere that must have sounded amazing live.

“Prometheus” is up next. While this song is still barbaric, it’s one of the more melodic ones in this track list. It’s a nice contrast from the constant chaos we’ve been hearing before. The choir, violin, and orchestrations dominate the song, yet it still sounds heavy. While the band has been keeping their composure throughout this performance, Spiros goes crazy during the end of this song, screaming at the top of his lungs and headbanging harder than he ever has in his life.

The intro to “Lovecraft’s Death,” one of the best Septicflesh songs in their entire discography, is exciting to hear—the heaviness of the song with the violins and choir will capture everyone. It’s an evil sounding song, but it’s also beautiful. The orchestrations are amazing and accentuate this incredible song.

“Dante’s Inferno” is next, and the song opens up with a beautiful stringed instrument melody that quickly becomes heavier when drums and horns are added. This song is the perfect combination of devastating and melodic. When it gets heavy, they destroy the building, and this song also has so many beautiful parts with the stringed instruments and the choir. This contrast makes watching this performance incredible.

Next up is another song from Communion—“Persepolis.” This isn’t one of the best tracks on that album, but it is another perfect song to perform at this concert. You hear horns and violins blaring throughout the song, and they dominated this track. It’s also a nice break from the destruction that we endured during the past two songs.

The break doesn’t last for long. The blastbeat and choir filled intro of “The Great Mass of Death” rings loudly. Even when listening to the recording, it’s easy to get immersed in this song. It’s by far one of the most intense songs off of The Great Mass and sounds unreal with all of the orchestrations, even though the clean vocals from Sotiris Vayenas and the choir sound a bit quiet.

The crowd loses it when the intro to “Anubis” starts playing. The intro is altered slightly, and the choir sings along with the guitars. This change works, making the song sound more ethereal. Otherwise, nothing else changed—the orchestrations and choir only amplify this track. It’s one of Septicflesh’s most famous songs and will always live eternally. Hearing this song with the orchestrations is life-changing for any Septicflesh fan.

The final song, shockingly, is “Dark Art” instead “Anubis” or another song off of Communion, but we understand why the band ended this infamous set with this track. “Dark Art” is a very distinctive song and a powerful way to finish their set. The way the orchestrations and choir blend into this song is also unforgettable, and surely left fans with an everlasting memory.

If you didn’t witness this concert live, the DVD deviates from the traditional live performance footage or metal band meets symphony show. The performance is perfect—the energy from the band, the orchestrations, the choir, and the overall atmosphere. Watching the DVD alone will give you the feeling that you were right there witnessing this spectacle.

The only weakness of the DVD is that there is a lack of crowd shot, as one of the best parts of live DVDs is seeing the crowd act insane in the pit. The camera mainly focuses on the band and the symphony, which is obviously the important, but it’s also amazing to see how the crowd interacts with the music. Hopefully, Septicflesh performs this masterpiece again. Until then, we can all watch Infernus Sinfonica MMXIX. ~ Stephanie Jensen