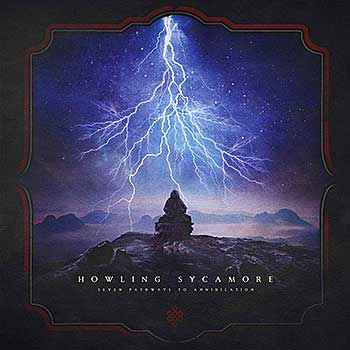 EXTREME PROG METAL: For their second album, extreme progressive metallers Howling Sycamore actually wanted to make things more challenging for listeners, which is insane. This band features members of Watchtower and Ephel Duath in its ranks, so they’re already about as challenging as a band can possibly be. The 53 minute runtime, even though the album contains only seven songs, is an immediate tip-off that things are going to get tough, and it only takes a couple minutes of massive opener “Mastering Fire” to test all but the most hardened prog mathematician. But those are literally the only people listening, so, perfect. The song goes from soaring classic prog metal to a far heavier, near death metal approach, the two sounds this band navigates with a surprising amount of deftness throughout this enjoyable album.

The Watchtower connection is through vocalist Jason McMaster, who commands the proceedings with a thespian flair and control, not at all intimidated by the heavier sounds behind him. Guest slots from Marty Friedman, Kevin Hufnagel, and Bruce Lamont don’t hurt, and neither does the huge production, but the real joy here is hearing the drumming of ex-Necrophagist and ex-Obscura skinbasher Hannes Grossmann sparring off with McMaster’s inimitable pipes. Is it ever too much to really take in and enjoy as music as we know it? Of course. But the dynamics in “Raw Bones” show that this is more than just wankery. This is a sophisticated sonic journey through extreme progressive metal, and it’s a success. Check out incredibly moving closer “Sorcerer” (dig that sax) for further proof. ~ Greg Pratt