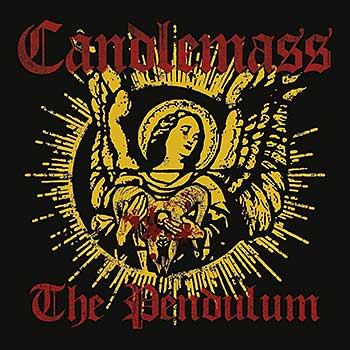 Following up with this year’s The Pendulum, the EP contains six unused tracks from The Door to Doom sessions. Consisting of just three complete songs (the title track, “Snakes of Goliath,” and “Porcelain Skull”) and three short instrumental tracks (“Sub Zero,” “Aftershock” and “The Cold Room”), the band conjures up some classic Candlemass hooky riffs.

Opener/title track “The Pendulum” ascends upon the listener with a melodic acoustic guitar melody before exploding into a fuzzy, midpaced “Symptom of the Universe”-esque Sabbathian riff, while “Snakes of Goliath,” with its slow burning, twisted riff and evil wah-wah effect, once again proves that Black Sabbath’s influence doesn’t fall far from the Candlemass tree. “Porcelain Skull” also contains some slow burning Sabbath riffs.

The Pendulum is a quality release, but it’s not as strong as its predecessor. The short, uninspiring instrumental tracks sort of feel like leftovers. However, the three completed tracks are very strong and would have made The Door to Doom even stronger if they would have appeared on that album instead. However, a new Candlemass release is always welcome in my playlist. ~ Kelley Simms