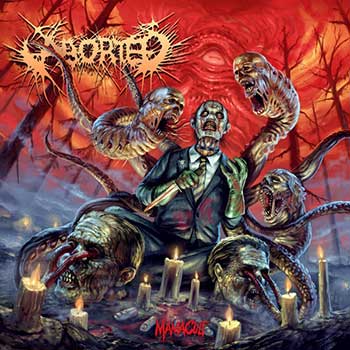 BRUTAL DEATH METAL: Aborted is back with ManiaCult, an album that continues the band’s technical and brutal sound. While some songs are throwbacks to older material and others are more experimental, ManiaCult is a solid album.

Starting off with the short but intense intro “Verderf,” Sven de Caluwe’s vocals are more atrocious than ever and the bass drum is loud. This leads into the title track, which sounds like good ol’ classic Aborted—barbaric and technical, with ruthless riffing and Ken Bedene’s inhuman drumming. Joe Badolato of Fit for an Autopsy makes a guest appearance, and there are breakdown-like parts in “ManiaCult” that some Aborted fans might not dig, but the rest of the song is awesome.

“Impetus Odi” is another single and one of the most substantial songs on the album. Monstrous with crazy slam parts as well as insane technicality, the track is completely unpredictable, leaving the listener on edge the entire time. Caluwe’s vocals sound evil, and the band puts its complete skill into this song. “Impetus Odi” does have some experimentation, but it’s also the song that sounds most like the band’s older material.

It’s commendable when a band branches off, but Aborted went a little too far on “Portal to Vacuity.” The song is very dark, powerful, moves in various directions, and the opening is very simple, but then it explodes into a cacophony of brutality. Caluwe’s versatile vocals add many highs and melodic parts, but the effects that occur halfway through the song feel out of place. Towards the end “Portal to Vacuity” does become more brutal and there is a seriously sick solo.

From start to finish, “Dementophobia” is extremely heavy and takes a trip back to their older material. The playing is complex, but everything is very quick, with the changes brief and the solo blowing up fast. Other than Caluwe’s high-pitched growls, this track is definitely an ode to Archaic Abattoir era material.

“Drag Me to Hell” is the perfect opening song for a live set. The guitar intro is slow and progressively gets more brutal, and one of the best aspects of this song is the creativity. “Drag Me to Hell” definitely stands out from Aborted’s discography in a good way. As opposed to the typical blood and guts, “Drag Me to Hell” goes in and out of slow and extreme, with Filip Danielsson of Humanity’s Last Breath making an amazing vocal appearance.

The album ends with “I Prediletti: The Folly of the Gods,” and it’s practically flawless. Caluwe’s classic vocals reign over insane riffing and drumming, with a very dark and devilish tone. Pair this with dexterous soloing and Bedene’s expert drumming, and you have a recipe for success.

Aborted packs a lot into ManiaCult. Mixing new and familiar sounds while maintaining the band’s technicality makes this one of their densest albums yet. ~ Stephanie Jensen