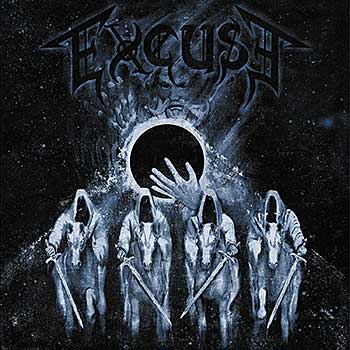 EXCUSE
Prophets from the Occultic Cosmos

DEATH THRASH SPEED: Borders are just imaginary lines created by people with more money and power than you and I as a way of keeping a stranglehold on public access. Take a big-ass piece of land like your United States of America. Why is someone able to smoke weed and have abortion services available to them, for example, on one side of an invisible line but can get thrown in the hoosegow for the same thing a few steps away on what is the same land mass? Globally, federally, and locally, people are having advantages and disadvantages given and revoked simply because of where they call home or are able to move to. Luckily, art is borderless and a band like Excuse can offer up blast furnace metal mayhem like Prophets from the Occultic Cosmos without geo-political hindrances stopping them from cherry picking influences. The trio of kiddos may be based in Helsinki, but the main thrust of their inspiration appears to come from Canada, where, for example, in the province of my residence (Ontario) minimum wage is $14/hr, but on the other side of an (again, invisible) line workers in Quebec make $12.50 and $11.50 in New Brunswick, which to no one’s surprise is separated by another one of those invisible lines.

Razor and Sacrifice were two of the biggest names in the Great White North throughout the 80s, and if you didn’t know better, you might think Excuse’s members grew up somewhere in southern Ontario binging on the aforementioned, or out west listening to a shit-ton of the overlooked and underrated Armoros, or maybe even in Quebec where they could have been pals with Soothsayer. As the reality of the situation stands, the average age of the Excuse brain trust is 24, so I’m going to guess they either have some pretty cool older siblings, watched a lot of Pepsi Power Hour—the Canadian Headbanger’s Ball—on YouTube, or spent vacations visiting their relatives in Canada because everyone everywhere seems to have relatives in Canada.

Prophets from the Occultic Cosmos is reminiscent of a cross between Razor’s early works Armed and Dangerous and Executioner’s Song as well as Sacrifice’s Forward to Termination wrangled with a charming rawness in the way they attack their instruments in the name of shimmering, thrashing speed metal. The title track and “Goddess Injustice” are fresh wrecking balls to the face in the name of Canadian metal’s golden age with “Black Crystal Visions” tacking on some Kreator and Darkthrone for good measure. Then, there’s “Blade of Antichrist” which combines all of the above and additionally employees touches of the naiveté of 80s Soviet Bloc metal and awesomely noodly Iron Maiden inspired instrumental sections. On the other hand, there are occasional moments where it becomes difficult to distinguish one part from another or tell when a particular riff or melody has been recycled in other songs. And the excessive echo effect on Oskar Lindström’s vocals may be there to tie the cosmic/lost in space theme and may work well for those locations where no one can hear you scream, but at times acts as a detracting factor from the furious death/thrash/speed metal Excuse has managed with excellent result on this, their debut album. ~ Kevin Stewart-Panko