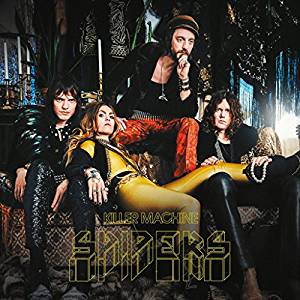 ELECTRIC SHAKE: Album number three has arrived from Sweden’s Spiders, and it is a killer. The musical foundation is still the same as prior releases—an energetic and hard rocking take on classic Detroit garage rock—but with a little more variety and polish this time out. From the opening blast of “Shock and Awe” to the moody “Don’t Need You” and hippie shake of “Like a Wild Child,” the band covers a good deal of ground but always features catchy riffs and infectious choruses. The psych elements that often go hand in hand with this genre are mostly lacking, though “So Easy” takes brief steps into dreamland. Vocalist Ann-Sofie Hoyles doesn’t have a huge range or a particularly unique voice, but she has a powerful voice, and the authenticity to match the band’s no-nonsense musical approach. This record could easily appeal to fans of bands like Graveyard and Blues Pills, though Spiders tends to focus more on rock ‘n’ roll and less on blues. With so many bands coming out of Sweden these days, many of which are mining similar eras from the past, it would be easy for Spiders to get overlooked. That would be a true shame, though, as the band is one of the best in a crowded field of quality artists and Killer Machine is the band’s strongest album yet. ~ Daniel Hinds

ENTER SHIKARI: Nothing Is True & Everything Is Possible