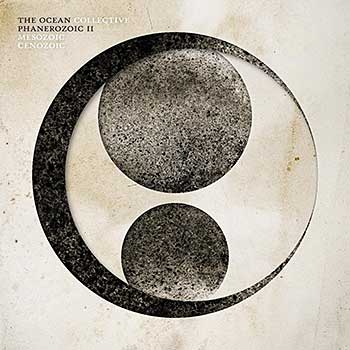 GERMAN PROGRESSIVE METAL: The Ocean (also known as The Ocean Collective) is back with a full-length sequel to their crushing 2018 release Phanerozoic I: Paleozoic. The new record, Phanerozoic II: Mesozoic | Cenozoic picks up where the last left off—at least geologic time-wise—with the new record continuing to explore the nature of deep time as comprised of geologic periods bookended by mass extinctions and explosions of biodiversity over the last 541 million years that comprise the Phanerozoic Eon. The first record took us through to the cataclysmic extinction at the end of the Permian period, ending with the song “Permian: The Great Dying.” This was a poignant way to end that record, because the extinction alluded to in the song’s title, which scientists use as a boundary in time between the Permian period and the Triassic period, is thought to have resulted from the emission of massive amounts of carbon dioxide unleashed by massive volcanic eruptions over a relatively (in geologic terms) short time period on the order of thousands of years. The extinction is the closest parallel that scientists know of to our current situation, with human induced climate change from combustion of fossil fuels bringing about the latest mass extinction—the Holocene extinction (otherwise known as the Anthropocene extinction event)—before our very eyes.

This second volume from The Ocean takes the listener from the bone-dry climate of the Triassic through to another mass extinction, the evolution and reign of dinosaurs, their subsequent annihilation, and beyond to the present climate crisis. As a geologist myself it is just so satisfying to see how the band explores these major events in deep time and links them to the present. But onto the music—the new record is every bit as varied as the previous, with mellow atmospheric moments that ebb and flow into heavy passages that leave the listener with a sore neck. The record opens with the track “Triassic,” picking up from the end track of the first record and telling the other half of the story of the extinction. Melodic elements swell and build into distorted guitars and guttural vocals in a massive wall of sound.

The album continues with “Jurassic | Cretaceous,” which begins with orchestral instrumentation over crunching guitar riffage. At 13:25 in length, the song is the longest on the record, but that length is not squandered. Instead, the avant-garde nature of their music is on full display, with unpredictable stops and starts and the synth-laden track taking unexpected twists and turns. There are so many awesome moments in this song, but the most powerful is towards the end, when vocalist Loïc Rossetti compares humankind to dinosaurs, “We are just like reptiles, giant rulers of the world, within a blink of an eye, wiped off the face of the earth.” This line refers to the massive extinction that took place at the end of the Cretaceous, when a massive asteroid impact wiped out 75 percent of all life.

The remainder of the record is quite varied, with melodic tracks “Eocene” and “Holocene,” and instrumental interlude “Oligocene,” giving a brief reprieve, while louder tracks “Palaeocene,” “Miocene | Pliocene,” and “Pleistocene” deliver a major dose of heaviness. “Palaeocene,” which refers to the geologic epoch from 66–56 million years ago, is the heaviest track on the album by far and is absolutely menacing with layered high and low screams—fitting for a time period that saw the breakup of the supercontinent Pangea and began with the aftermath of the Cretaceous-Paleogene (also known as the Cretaceous-Tertiary) extinction event, which wiped out the dinosaurs and paved the way for mammalian evolution and eventually the evolution of humans.

This second half of the two-part Phanerozoic albums is much more freeform in its structure than the first, but is just as satisfying. There is not a single bad track on this record, which is best enjoyed when listened front to back. For a truly enjoyable experience, spin both records front to back in order, the result is mind-boggling! ~ Nathan Katsiaficas