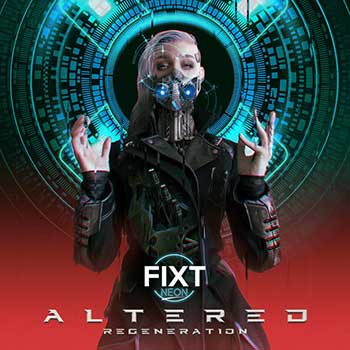 FUTURISTIC ELECTRONIC FIRESTORM: Reminiscent of that secluded goth club you ventured into during your formative years to have a few drinks and just dance, FiXT Neon: Altered (Regeneration) feels like the music we used to vibe to back then and still enjoy now.

After the Algorithm plays the role of bombastic harbinger with opener “Protocols,” DreamReaper completely fucking levels the sonic battlefield with a blast across the bow in the form of “Prismtek,” a glorious bouquet of urgent noise that sounds plucked from the cutting room floor of the first Matrix film. It’s lush and exciting, with turbulent synthwave and EDM breaks that will have you bobbing your head, whether you want to or not. Inexedra’s “Puzzle Brain” is expansive and unwavering with non-stop beats and pulsing undercurrents of synth, a track that will make you want to do a shot of 151 rum and hit the dance floor. Void Chapter’s “Reclaimer” is as heavy as it gets on FiXT Neon: Altered (Regeneration), though that heaviness is balanced by accessible refrains of atmospheric sound. 3Force’s “Equiviolent” is a standout piece of noise that sounds primed for just about any video game. Signal Void’s “Bad Sector” rounds into form during its latter stages, and “Street Sweeper” from GunFight features the album’s most potent bass drops.

FiXT Neon: Altered (Regeneration) is quite the aural adventure, one that houses a lot of replay value. It’s a compilation fit for party soundtracks, but if you just want to pop this record on while you’re at home alone drinking whiskey, that’s perfectly acceptable as well. ~ Brian Campbell