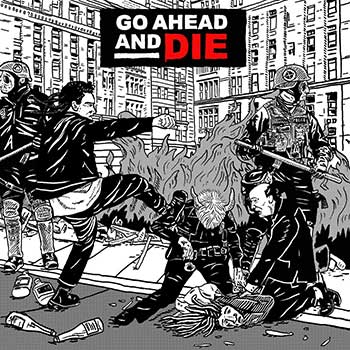 PUNK TINGED DEATH METAL: Helmed by father and son duo Max and Igor Cavalera, Go Ahead and Die is a bit of a sonic departure for the iconic revered Soulfly/Sepultura frontman, straying away, for the most part, from the heavy groove metal that has paid his bills for decades, opting for something fresh when compared to the rest of his long body of work. The 11 tracks that make up this eponymous debut lean closer to crust and hardcore punk than anything, adding yet another line to Max’s resume.

Opener “Truckload Full of Bodies” is a crushing slab of old school death metal. “Toxic Freedom” and “I.C.E. Cage” are behemoth tidal waves of devastating noise with Max’s fingerprints all over them. Merciless riffs abound on “Isolated/Desolated,” a standout track complete with dueling death growls from the Cavaleras. “Prophets Pray” keeps the foot firmly on the gas with urgent guitar work and beefed up breakdowns. The destructive pure violence of “Punisher” reminds of turn of the century death metal with early metalcore leanings. “El Cuco” and “G.A.A.D.” are album highlights with classic death metal vibes, floor punching refrains, and stomping riffs. “Worth Less Than Piss” is about as hardcore punk as they come, and closer “Roadkill” puts an emphatic stamp on Go Ahead and Die with powerful, guttural vocals, chugging riffs, and visceral emotion.

If nothing else, Go Ahead and Die is proof that you can teach an old dog new tricks. Not to say that Max Cavalera, who turns 52 in August, has lost anything close to a step along the way—quite the opposite. These songs and this album proves that he has a hell of a lot left in the tank and plenty of tricks still crammed up his sleeve. Let’s hope that this is one of many more collaborations to come from father and son. ~ Brian Campbell