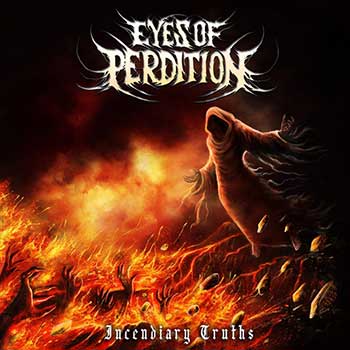 Opener “Incendiary Truths” is a one-plus minute instrumental consisting of slow burning riffs with a traditional hardcore vibe and a menacing buildup. The short and to the point track is slow paced and powerful with simplistic riffs and drum beats, which is indicative of the rest of the tracks as well. The Neanderthal riffing of “Dealing Death” verges more into death metal territory with its vicious vocals, slamming blastbeats, and raging rhythms. “Ruled by Pluto” is a mid-paced adrenaline fueled aural assault, while the rumbling tone and furious aggression of “For Natty Ice” makes it a real scorcher of a track. It’s easy to envision the mosh pit in the live setting becoming a violent swirl of sweaty, slamming bodies. Album closer “When Deeply Ingrained Traumas Spill Forth Like Maggots in Carrion” sums up what the band does best and is a good indication of the direction it’s headed in with its next release.

Incendiary Truths was recorded, mixed, and mastered by Argentinean producer Julian Iturrieta, with amazing cover art created by Pzychopart. There’s nothing groundbreaking about the death metal/hardcore hybrid Eyes of Perdition is peddling, but the songs are performed with such conviction and drive, making it all worthwhile. Eyes of Perdition has been gaining some great traction lately within the metal scene and is becoming a band to definitely look out for in the future. ~ Kelley Simms