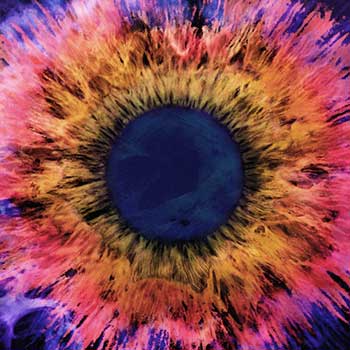 BEAUTIFULLY CONSTRUCTED WORK OF ART: Thrice’s 11th album, Horizons/East, is the kind of record you’ll want to actually pay attention to, not just in the background while you’re driving or doing chores. It’s the kind of record you’ll want to buy a physical copy of to hold in your hands while you listen to the music and stare into the abyss of the album cover art, reflecting on the chaos of life. It’s the kind of record you’ll keep thinking about after you’ve listened to a few times, wondering what that one line or that verse really means and the implications of what it’s trying to say. In short, it’s an overall sonic triumph that deserves repeated listens to really gain deeper appreciation of the complexities and nuances dug deep within the layers of impeccable production and musicianship.

Evocative and riddled with imagery, the lyrical content of the album reads like poetry. Unusual choices of words and synonyms, it feels like each moment and thought was carefully crafted and sculpted. “Color of the Sky” is the perfect opener. With pretty, undulating patterns that ripple through the speakers creating a quiet, oscillating soundscape to begin the record, its reflective lyrics also help set the tone for the remainder of the album. Lyrically, it has a dystopian sci-fi vibe but with elements that ring true for everyone—“I don’t know the way, but I know that I belong out here.” With talk of new frontiers and horizons, it’s metaphorical for the journey we’re all on as part of the adventure that is life.

And as the adventure continues with “Scavengers,” we begin in more familiar territory with this track driven by a solid, determined, and repeated guitar riff. Displaying more unusual chord progressions and changes, Thrice is showcasing early on in this album that they still have plenty of tricks up their sleeve this many years into their career. After 11 albums, it must sometimes be difficult to come up with something fresh, but it feels like Thrice is simply doing what they enjoy while still finding ways to push their own boundaries and stretch their musicianship and songwriting. “Northern Lights” is jazz-like in musical expression, which is no coincidence. Wanting to push themselves, the band sets themselves various challenges during the making of the album, including writing a song using jazz quartal chords and turning the Fibonacci sequence into a guitar riff. Repeating the theme of new horizons in the lyrics, “Northern Lights” also helps connect the various strings and through threads that make this album slightly conceptual in nature.

A lot of the tracks have a laid back, easygoing vibe, such as the dreamy “Still Life” or “Buried in the Sun” with its casual undulating chorus and funky guitar riff. The latter does, however, carry an important social message, giving the listener something extra to think about. That’s a running theme throughout the album, which manages to demand a “better way to build a world” (“Northern Lights”) without being preachy or too in-your-face about it. There’s a bit of a natural dip in the middle section of the album where it’s easy to lose attention as a listener, with a couple of the songs starting to run into one another and feel samey at times. Things pick up again, though, with “The Dreamer,” which has possibly the most obvious sing-along chorus of the record and a memorable theme we can all relate to. After all, aren’t we all dreamers?

By the time it gets to the trance-like, hypnotic final track “Unitive/East,” it feels like you’ve come full circle—a journey that’s sometimes exhausting and draining as you reflect upon your own life and the world around you, but one that is ultimately uplifting. Arguably their most ambitious piece to date but one that will undoubtedly sit well amongst their extensive back catalog, Horizons/East is an album Thrice should be proud of. ~ Becton Simpson

JOHANSSON & SPECKMANN: The Germs of Circumstance