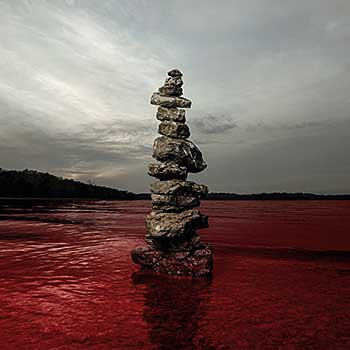 ALT-METAL/HARD ROCK: Carving out a distinctive and long-lasting career in the music business these days is almost impossible. Thankfully, a band so charismatic as Atlanta’s Sevendust comes along and makes everything feel all right. On its 13 full-length album, Blood & Stone, the quintet continues with its distinctive sound it carved out since its 1994 inception.

Sevendust hit virtual home runs with their first four albums—Sevendust, Home, Animosity, Seasons—which are considered to be classics in the band’s back catalog. There’s really no such thing as a bad Sevendust record, but it was a little easy to forget about the band starting in the late 2000s. However, Sevendust has aged very well and received favorable reviews on its previous album, 2018’s All I See Is War.

Featuring vocalist Lajon Witherspoon, guitarists Clint Lowery and John Connolly, bassist Vince Hornsby, and drummer Morgan Rose, Sevendust has remarkably sustained a very stable lineup throughout its existence with only one member change to date. On these 13 new tracks (including a rousing cover of Soundgarden’s “The Day I Tried to Live”), Sevendust has created a perfect mixture of the band’s early era sound combined with its more modern, latter era output.

Opener “Dying to Live” contains the familiar Sevendust musical mixture—heavy, chugging riffs, combined with pulsating melodies and soaring vocal harmonies. It’s what the band has done so well since its beginning. The same goes for tracks “What You’ve Become,” “Nothing Left to See Here Anymore,” “Dying to Live,” “Desperation,” and especially the main riff on “Blood From A Stone,” while “Feel Like Going On” contains the more modern, alt-metal vibe of their current status, which balances out the album nicely. The record also contains some melodic, ballad-esque tracks such as “Criminal” and “Alone” that complete the overall dynamic and listening experience. In addition, the music box-esque keyboard melody intro on “Kill Me” plays well with the overall mood of the track, while “Against the World” is one of the heaviest songs on the album.

The song structures on Blood & Stone are short, guitar/vocal-driven tracks that are super accessible and inviting. There’s just enough aggression and heaviness injected into each track, but there’s also generous helpings of melancholy and melody mixed in as well. The track sequencing is also a strong point to the record, which makes the listener feel very engaged throughout the entire album. There are also quite a few electronic samples and atmosphere throughout the album (see “Love” and “Dying to Live”) that adds a different dynamic, but never overpowers a particular track.

The overall sound is very well balanced as the drums/guitar tandem play off each other well where not one instrument is higher in the mix than the other. Blood & Stone marks the return of producer Michael “Elvis” Baskette (Alter Bridge, Tremonti, Slash), who achieves a remarkably familiar sound with a crisp, clear, and pristine production. The standout element of Blood & Stone would have to be Lajon’s superb vocals. The soulful singer brings emotion, feeling, and atmosphere with each line he sings, making a heartfelt connection with the lyrics. It’s just so great to be able to say that there’s a new Sevendust album out. Blood & Stone is everything a Sevendust fan could want. ~ Kelley Simms