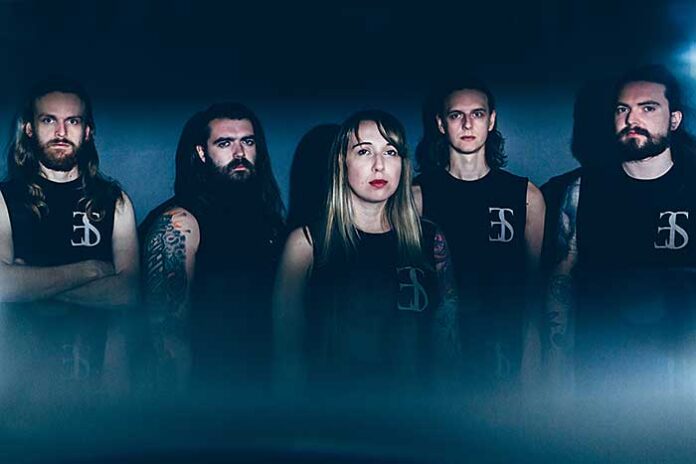 Employed to Serve has quickly risen to the forefront of the heavy music scene in the UK. Now with their fourth full-length album out on Spinefarm Records, vocalist Justine Jones speaks about the new album Conquering, being in a band with her significant other, and running the successful Church Road Records.

How long has Conquering been in the works?
It’s been quite a quick turnaround actually. We had nothing to do as we couldn’t leave our houses. This must be the quickest we’ve turned around an album ever. Usually, we’re recording in between having lives and touring. It’s been exciting. It’s really nice to have something to look forward to that is definitely going to happen because it doesn’t rely on going anywhere. It couldn’t come soon enough. I’ve been really excited since we started releasing the singles. I can’t wait for everybody to hear it. We had two songs demoed before we did our last tour, and then we wrote the whole album in four to five months in the lockdown in spring and summer. Then we went into the studio in that really horrible winter of 2020 into 2021 and recorded it in two or three weeks.

Where does the band draw its influences? There’s some Slipknot on “Universal Chokehold” and “Twist the Blade,” maybe Hatebreed with “We Don’t Need You,” and even Gojira on “World Ender.”
Yeah! Early Roadrunner bands. Some Machine Head, Lamb of God—they’re not a Roadrunner band—and Slipknot, Fear Factory. Hatebreed is a big one for me as well. Their Perseverance album is one of my favorites of all-time. All the stuff we grew up on, we were obsessed with all of those bands when we were preteens. It’s quite nice to pay homage to that music. It’s really fun for us to play. We wanted to veer away from the more hardcore sound that we had and go for a bit more of a metal vibe, hence we’ve got solos on every song.

“I WASN’T GOING TO WRITE A SAD ALBUM. NO ONE NEEDS THAT RIGHT NOW, AND WE DON’T NEED THAT EITHER. WE WANTED TO HAVE A REALLY POSITIVE ALBUM.”

Can you talk about the role of mental health in your lyrics, such as on “The Mistake” and “Sun Up to Sun Down?” How do you feel about the metal and hardcore genres as a forum to discuss these issues?
“Sun Up to Sun Down” is about watching someone you love fall victim to addiction, like the idea that the urge is always in them from sun up to sun down. Yeah, there are mental health topics, but for this album mainly there’s a positive spin on it. It’s about overcoming the issues of mental health and adversity in daily life. Conquering is about conquering your own ego and coming out of yourself and trying to hone in on the positive aspects of life. It’s a bit of a mixed bag, but it’s a positive record.

Did the pandemic necessitate this positive spin?
Yeah, I wasn’t going to write a sad album. No one needs that right now, and we don’t need that either. We wanted to have a really positive album. I go back to Hatebreed’s Perseverance. It makes me feel so gassed and stoked on life. Even if I’ve had a bad day, I put it on and it gets me through. I wanted an album like that. There are loads of sad albums for different moods, but I wanted this to be like a cheerleader album.

Can you talk about the music scene where Employed to Serve cut its teeth? What was it like starting out, and how has it been changing?
It was pretty slow going at the beginning. We started touring in late 2013, and it wasn’t until 2015 that I felt the scene was waking up a bit. We started on the cusp of when a lot of the local bands started quitting as they got older and wanted to do different things in life. It wasn’t until 2015–2017 that a boom of really exciting bands happened. Venom Prison and Svalbard were about the same time as us, and then later on we had Conjurer, Boss Keloid, and loads of other bands. It’s definitely a really strong scene right now. We’ve got some killer bands in the UK. I’m really excited to be a part of it and support each other. It’s quite a nice scene to be a part of—there’s not any nastiness or competition.

“IT’S GOING TO BE MAD GOING FROM REHEARSING IN OUR PRACTICE SPACE FOR MONTHS AND MONTHS TO PLAYING VENUES THAT ARE AS BIG AS 20,000 PEOPLE.”

Employed to Serve has a massive run scheduled with the mighty Gojira early next year in Europe and the UK. How excited are you to go out with such a huge band?
We’re so, so excited about the Gojira tour. We’ve been such huge fans of that band for over a decade. Alien Weaponry is sick as well. They’re one of the most exciting new bands. We saw them at Hellfest, and they absolutely crushed it. It’s going to be such a euphoric tour to come back on. It’s going to be mad going from rehearsing in our practice space for months and months to playing venues that are as big as 20,000 people. This new album is going to make Gojira even bigger. It’s such a great album. They’re the gold standard of what you want to be as a band. They would never compromise their sound, their output has always been incredible, and they do so many great things for the environment. Just a nice band that does really heavy riffs! We’ve been trying to get to North America for ages. We actually got as far as getting our visas accepted last year, but obviously now they’re expired. We should hopefully be out soon, maybe end of next year or 2023. We hope this album will open up more touring opportunities, but we’re obviously pretty weary of lockdowns and different restrictions state to state.

Historically, hardcore and metal haven’t always been inclusive scenes, especially for women. Do you feel like this has been changing?
I’d like to think it’s become less misogynistic. I have fortunately not experienced it too much, but I have heard stories from girlfriends who have had run-ins with weird guys at shows. I think that at least within our little pocket, it’s pretty self-aware and looks to include people from all races, backgrounds, and sexual preferences. I’d like to think it’s a lot nicer, but I know from what I’ve heard it’s not in the wider scheme of things. You can only hope it will get better, and I think it will, but it takes time.

“WITHIN OUR LITTLE POCKET, IT’S PRETTY SELF-AWARE AND LOOKS TO INCLUDE PEOPLE FROM ALL RACES, BACKGROUNDS, AND SEXUAL PREFERENCES.”

What has it been like for you being in a band with your partner Sammy Urwin?
It’s very nice actually! One of the hard things of being in a touring band is being away from your other half. We’ve been dating since we were 16. We were in the band five years into our relationship, so I felt like we had a good gauge of each other. We knew how each other worked, so it’s been quite nice to be honest. I feel like we’re a team!

You and Sammy started Church Road Records and have released amazing albums from such bands as Svalbard, Wowod, and Palm Reader. How did this come about?
It’s been such a nice thing to concentrate on during the lockdown. We have quite a big roster. I think we’re like 15–20 bands now? We do about one release per month. We love all the bands we put out. Our tagline is “from the extreme to the serene” because we have black and death metal bands and dream pop and shoegaze, and everything in between. It’s mine and Sammy’s musical tastes in a label. We find bands that we feel like are really exciting and get excited about working with. It’s been really good. I’m stoked to have the final say on bands that we release.

What would your dream tour be, if you could pick bands you’ve always wanted to share the stage with?
We already ticked off Gojira from our list, so I’ll go for a new one. I’d love to do a worldwide tour with Slipknot and Conjurer. That’d be so sick!

DAWN RAY’D: The Intersection of Chaos