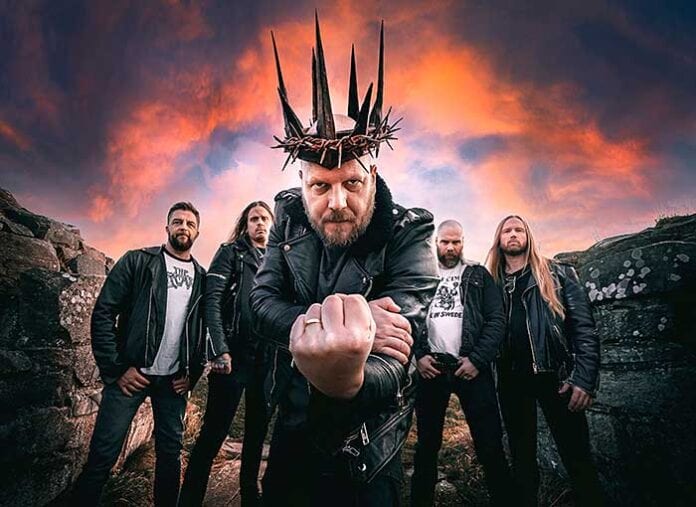 “It’s a long way to the top if you wanna rock ‘n’ roll.” Wise words from AC/DC, but what about staying relevant? The Crown first returned to the international extreme metal scene back in 2010 after a six year hiatus and have released a relatively steady stream of solid albums since then. And their latest, Royal Destroyer, is something special—a barn burning effort that echoes the Swedish band’s prior high points (Eternal Death, Crowned in Terror), while simultaneously sounding fresh and…well, pissed. Who said you mellow out with age? The Crown guitarist Marko Tervonen spits in the eye of that idea and chatted with us to discuss the new album and what keeps The Crown’s creative flame burning.

How are you feeling about Royal Destroyer now that it’s set to be released? Was there anything different this time around that really stuck out to you?
In a way, we continued with the approach we had going on Cobra Speed Venom. We found a really good way of writing music, rehearsing, and recording. We went a bit old school with the approach, meaning that we do everything together, rehearse a lot instead of file sharing, go into the studio well prepared, and just do one to two takes per song and avoid any crazy editing, sampling, and other modern solutions. We believe it gives a more honest approach to the final result, also a bit more rough approach. We actually recorded the whole album in only seven days.

The Crown has always paid attention to detail when it comes to arrangements. Many years ago you said that the band’s aim was to meld old school death metal with the melodic tightness and songwriting of Master of Puppets. Bands now wouldn’t bat an eye at that statement, but at the time it was refreshing and bold. Does this ideal still apply to The Crown’s songwriting today?
I think so. We have always tried to give every song a unique touch and avoid creating a song twice. Obviously, we have our sound when we do music, but I wouldn’t do a “Deathexplosion Part.2” and base another song on a similar guitar rhythmic for an example. We rehearse and when playing together a lot of ideas for details come up.

“WHEN YOU ALLOW YOURSELF TO INCORPORATE ELEMENTS FROM OUTSIDE, THAT’S WHEN YOU MAKE HONEST MUSIC.”

If anything, that dedication to old school values got stronger as The Crown progressed. Deathrace King, Hell Is Here, and Crowned in Terror had plenty of rock ‘n’ roll swagger, and “Motordeath” from Royal Destroyer still shows this off. How did you filter in these influences over the years?
When we did Hell Is Here we started to get a bit more confident, meaning that we really just want to do the music we like ourselves without thinking, “Is this okay to do in death metal?” We like many different kinds of music, and when you allow yourself to incorporate elements from outside, that’s when you make honest music. I’ve heard during the years the question, “What do you call your music since you are not a straightforward death metal band?” And from a commercial point of view that might be working against us, that people can’t really put a simple stamp on our music. But I honestly don’t care at all about that. I sleep well at nights. This is our band and we do this journey on our terms.

Speed has always been a factor with The Crown. “Baptized in Violence,” “Total Satan,” or “Kill (The Priest)” get in and out quickly. Then there are songs like “The Black Heart,” “Death of God,” “Killing Star,” or “We Drift On” and “Glorious Hades” on Royal Destroyer that approach or exceed 10 minutes, sometimes with mid-paced tempos. Is having at least one of those brooding tracks a calling card for The Crown?
I like variety. I like the Metallica way of thinking that an album should be a journey and it should take you to different places. We still pay attention to stuff as track order and can have extremely long discussions about that. Our best albums are the ones where we have showed different sides from us, and I’m happy to say that we have never done the same album twice. That is a challenge I really enjoy. It would be easier to have a recipe of how we should make albums, but that type of thinking would quickly become boring and we would lose the inspiration of creating music.

“AN ALBUM SHOULD BE A JOURNEY AND IT SHOULD TAKE YOU TO DIFFERENT PLACES.”

Royal Destroyer is the strongest album you’ve done since reforming. What are your thoughts about how Doomsday King, Death Is Not Dead, and Cobra Speed Venom did for the band, compared to how you were doing pre-hiatus?
Both Doomsday King and Death Is Not Dead are a bit different type of Crown albums. Doomsday King wasn’t originally intended to be a Crown album. That was the Dobermann project Magnus had in mind. Actually, Magnus wrote the whole album. Death Is Not Dead was a bit of an off album in the sense that we didn’t have a solid lineup. Halfway during the rehearsals, Janne moved to the US, so we didn’t have a drummer. It ended up that I played the drums on the album, and we didn’t even rehearse half of the album, we just went straight into recording. That is a couple of reasons why both Cobra and Royal became so good. We were a lineup, had amazing dudes Henrik [Axelsson, drums]and Robin [Sörqvist, guitar] onboard, and we worked on those albums as a proper band.

Do you hear from fans as to what their favorite period is for The Crown? Are you able to analyze what you’ve achieved over the years?
I really enjoy talking and analyzing things like that with an outsider, since our view, obviously, differs a lot. When I think of a certain album, the fan thinks about the music, but I start thinking about the recordings, shows, vibe in the band, and stuff like that, so those type of things color my thoughts. I’m a music nerd myself, and I can definitely relate to having favorite albums or eras with bands. The coolest thing is that after releasing 10 albums, I think I’ve heard someone having any of our albums as their favorite. That’s pretty fucking cool! We don’t have an embarrassing super weird album in our back catalog.

“THEY REALIZE SOMETHING PARTICULAR IN A LYRIC YEARS AFTERWARDS THAT GIVES THEM AN AHA EXPERIENCE.”

Lyrically, The Crown has always shined a bit brighter than your contemporaries. This album is no exception, of course, with “Scandinavian Satan” and “Ultra Faust” being highlights. Was this always a source of pride for The Crown, to have the lyrics mean just as much as the music?
Yeah, we’ve been lucky to have clever lyric writers in our band. I many times hear from people that they realize something particular in a lyric years afterwards that gives them an aha experience. We can many times have titles that first sound almost too cliché in a way, but when you dig into them and understand them, you will definitely find a deeper meaning behind them. I did an interview yesterday, and she told me that after 11 years she finally figured out the meaning of “Dixie Narco” from the song “Natashead Overdrive.” That was really funny to hear!

How was the actual recording of Royal Destroyer? The production sounds thick and fat, and it makes the album as a whole definitely sound heavy. Do you still get together to write and record, or do you do a lot of it remotely?
As I said earlier, the approach nowadays is back to the roots—rehearse together, write together, record together, argue together. The whole approach in the studio is a no bullshit approach—just go in well prepared, capture performances and attitude. No modern editing to make everything sound perfect. What you hear on the album is what we can deliver live.

“THE APPROACH NOWADAYS IS BACK TO THE ROOTS—REHEARSE TOGETHER, WRITE TOGETHER, RECORD TOGETHER, ARGUE TOGETHER.”

Live concerts seem far away at the moment, but what are your memories about touring America? Do you hope to return once this is all over to support Royal Destroyer?
We have talked about going there for years. It’s just a matter of logistics and financial support. It’s expensive to go there and do things the proper way—expensive flights, work permits, and stuff like that. It’s crazy that it’s cheaper for us to travel to Japan than do shows in the US, but we have absolutely great memories of the tours we’ve done there. We got to see and experience so many cool things that I will remember for the rest of my life. Right now we don’t have a single show booked due to this Covid madness, but we really hope that it will become safer to travel and do shows in a near future. Once again, thanks for still keeping with us on our death metal journey!