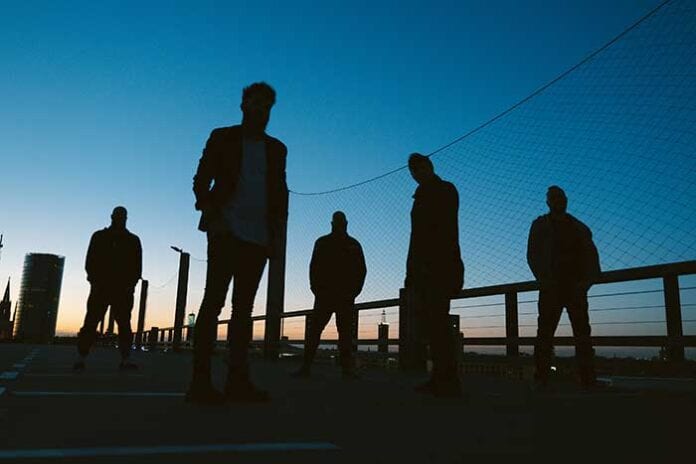 Metalcore veterans Caliban have been throwing down with melodic death metal infused riffage and colossal breakdowns since 1997. All the while, the natives of Essen, Germany—and specifically vocalist Andreas Dörner—have plied their trade in English instead of their mother tongue. This isn’t a surprise, as all their influences (At the Gates, Earth Crisis, Slayer, Refused, Acme), contemporaries (Darkest Hour, Unearth), and fellow countrymen (Heaven Shall Burn, Deadlock, Mörser) all hollered their hearts out in English.

A decade ago, Caliban recorded a version of Rammstein’s “Sonne” for their Coverfield EP. That began a trend that saw follow-up full-lengths include a single song sung in their native language, which Dörner himself described as “weird.” As pandemic living turned everything upside down, Caliban has emerged from a planned, self-imposed hiatus with Zeitgeister, seven songs from all eras of their discography that have been musically altered and sung in German. We caught up with the frontman via Zoom to discuss (in English) feeling uncomfortable with one’s native language, the perils of being your own version of Google Translate, and being haunted by songs.

Starting in the late 90s, you initially sung in English. Was that because the music you listened to was in English or did you have a grander plan to expose yourselves to a bigger audience and play places other than Germany?
To be honest, we never thought about anything like this. We just liked music with English lyrics. Everything we listened to was in English, so it was normal and natural to use English instead of German. In the beginning, we never thought about putting out CDs or records, where and who would listen to us, or about being popular, we just wanted to do music. When I started to sing in German with the Rammstein cover, it actually felt a little bit weird using the German language, even though it’s native. It was strange at first, but now I like it.

English is widely spoken throughout Europe. Is being taught the language a common part of your upbringing or something you had to explore on your own?
We have English taught in school very early on, so everybody grows up with it and most of the people in Germany and Europe speak English. But, in school, I was not very good in English—I’m still not (laughs)—but I got better after school when I started writing the lyrics and watching movies and TV shows in English. I taught myself more that way.

As a vocalist, did writing lyrics and having your vocals produced—doing multiple takes in the studio and exploring how words can be bent and shaped—help your vocabulary or pronunciation?
Umm, kind of. In the beginning, I wrote my lyrics in German and would translate them into English. Sometimes, it was pretty tough because, of course, I can better express some things in German and didn’t know the right words. But over the years, it got better to where now I’m writing directly in English and it works, except for the new record (laughs).

“THIS IS A SPECIAL RECORD WITH INTERPRETATIONS OF THE OLD STUFF AND TRANSFERRED INTO GERMAN.”

Your new bio says Zeitgeister came about because of fans’ demand for a German language record. Is that something you’ve encountered a lot over the past 25 years?
Some people have asked why we don’t do songs in German, but more people prefer English. The first reactions of those who have responded to the release of “Intoleranz,” the first single from the new record, seemed like some people were a little bit confused. And some people, after they found out the whole record is in German, wished it was in English. We started a few years ago doing one German song on each album, and those songs are always pretty popular in Germany because people liked that they can sing-along. Some people have asked if we could do that more, but for us putting one German song on a record was a special thing. This is a special record with interpretations of the old stuff and transferred into German. I wouldn’t say it happened because of a demand. The idea came up when Marc [Görtz, guitar] and I were doing an interview with a German journalist and we were talking about a full German album. It was just a conversation idea, then we talked about it and liked the idea.

There are one or two songs that go back to your first album. How did you go about selecting which ones to record?
We picked some of what I would say are our old classics, songs that we’ve played a lot live and some we picked because of the topic of the lyrics. Everyone thought about what songs we could do, picked a few, and the ones that had the most votes were the ones we used. Marc and our producer Benny [Richter] worked on what could be done with the songs to refresh them and make them work in a new way. Overall, it was just us picking the songs. The songs aren’t exactly the same musically and lyrically as the original versions. There are a lot of new parts, but the basics are the same and still in our brains somewhere (laughs).

How was it translating songs you’ve been singing in English for years back into German?
It was like going in reverse (laughs). I wouldn’t say it was weird, more like it was interesting. The original German parts, we couldn’t use in the new versions of the songs because of the changes we made for the new interpretations. It was fun and pretty tough, but I think we managed it in a good way and tried to use the topic of the songs, then worked our way around the lines from the original lyrics. And the original song titles wouldn’t always fit to the new lyrics, so we mostly chose to change the titles to fit better with the lyrics.

“IT’S THE SAME WITH THE SONGS—THEY’RE THERE, BUT THEY’RE NOT REALLY THERE. THEY’RE GHOSTS OR THINGS FROM THE PAST THAT ARE STILL THERE.”

What’s the significance of the record’s title, Zeitgeister?
We chose the name because of ghosts. “Geister” means “ghosts” and “zeit” means “time,” so it’s like “time ghosts.” Ghosts aren’t really haunting you, but they’re always around you, even if they’re not really there. And it’s the same with the songs—they’re there, but they’re not really there. They’re ghosts or things from the past that are still there.

Was Zeitgeister in your pre-COVID plans? When was it recorded?
It was recorded during all this COVID shit. The music was done during the spring and summer of 2020, and we started recording the vocals in October/November. All the pre-production was done over Zoom. Everyone was home and we worked over computer. I mean, this is how we usually work before going to the studio, but it felt different because we had to do it this way and had no other choice. The funny thing is that we had a break planned for 2020. We played our last show at a festival in August or September of 2019 and we planned a year off to take time for us, get inspiration, and work on new music, and then came COVID. This was actually the first year we had planned to do nothing, so we were prepared (laughs).