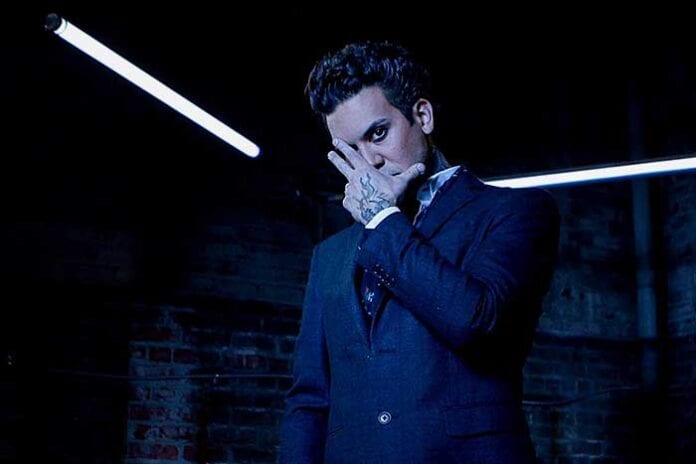 Aaron Thompson’s electric melodies and moody vocals are sure to capture the attention of darkwave and brooding synthpop music fans with his endeavor Empty Streets. This dark act is on the cusp of a brand new EP titled Age of Regret, entering the public soundwaves in June of 2021 on Cleopatra Records. To hold the fans over for another couple of months, Empty Streets released an official music video for Age of Regret, featuring a brilliant luminance paired with stunning aesthetic compositions.

But before Empty Streets pushed back into the public’s eye recently, Aaron has a long history with music that started in his younger years. The more melancholy sound was thanks to his gothic girlfriends of Aaron’s youth, inspiring the darker musings you can hear in his music today. “I was a punk rock kid growing up primarily, but I was always really attracted to goth girls. In my late teens or early 20s, I dated a few girls who turned me on to that sound and scene. So, wherever you are, ex-girlfriends of my past, thank you!”

Although Aaron may be best known for his work that doesn’t tie directly into music, his passion for the audible arts started long before his career in adult entertainment. “I have always been into music and bands. Before my career in the adult world, I was always touring and in bands. I even have a studio at home. I have always continually produced music, wrote songs, and messed around with friends in musical projects. This solo project, Empty Streets, I have been doing for years off and on.”

“I AM A PUNK ROCK MUSIC GUY FIRST, AND I BEGAN FEELING LIKE THERE WASN’T ENOUGH OF THAT AS A PART OF MY LIFE”

When the world found itself turned upside down by an unexpected pandemic, new opportunities arose to reevaluate what might be missing in someone’s life. “With COVID and the world changing, I had some time that freed up. I am fortunate and blessed to be so successful in my career in the adult industry, but I was feeling a little unbalanced. I am a punk rock music guy first, and I began feeling like there wasn’t enough of that as a part of my life, so I wanted to change that.”

“I am so fortunate that I started so young. I played my first show at 15-years-old in an old hardcore band. I grew up in church and my dad is a preacher so my first band ever was a youth crew style hardcore band that covered Gorilla Biscuits and Youth of Today. We were playing in church for the youth groups. That’s where I got started! Memories like that I remember very fondly at all times, in all stages of the music scene. From the punk scene in San Diego where I grew up all the way to when I started touring the country and later the world. I would say the coolest thing, and most surreal thing, to have happened to me would be seeing people sing the words to the songs that either I wrote or was a part of in some capacity. That’s a high that cannot be replicated,” Aaron tells us when asked about his favorite musical memories. Having been involved in the music scene for so long, there were bound to be influential moments that led the artist to where he is currently.

“A GOOD SONG IS A GOOD SONG. THAT IS WHAT I WANT TO HEAR IN MUSIC.”

Some things that are very prevalent in any song you pull from Empty Streets are the exquisite and tailored lyricism paired with skilled songwriting ability. The music intertwines with perfect harmony, pairing the words with the sound elegantly. Although aspects of such a feat can be innate, converting inspiration into something of your own is a skill. When prompted as to where the inspiration for the music is drawn, Aaron tells us, “I pull from a lot of places because I listen to a lot of music. Ultimately, I am a song guy, so I just like a good song. Whether that be a Taylor Swift song or something by Youth Code or Depeche Mode, VNV Nation, or Slayer, a good song is a good song. That is what I want to hear in music. To whittle it down a bit for Empty Streets, my primary influences are Depeche Mode, Nine Inch Nails, Nick Cave and the Bad Seeds, and a lot of dance music. Hey, Taylor Swift to be honest—a lot of the song structure and the way her dynamics go. Pop that’s not necessarily down the middle of mainstream, such as Perfume Genius and Twin Shadow.”

Having broken the unwritten taboo of referencing an outside genre in your influences, Aaron continues, “I don’t need to impress anyone. I am not trying to be cool. I am also not trying to be goth. I am just making some songs that I like and an aesthetic that I like. I am a well rounded human, so I personally think it is a little odd when people only have their one lane of influences. I get it, you want to appeal to your crowd, but I’m honest. On my last record, I did a Selena Gomez cover. I am not hiding my love of pop music, the great hooks and melodies.”

“IT IS A LITTLE ODD WHEN PEOPLE ONLY HAVE THEIR ONE LANE OF INFLUENCES.”

To talk about the creation of the music itself, Aaron writes the lyrics first. For him, the lyrics drive the rest of the song, as sound comes naturally after the words meet the page. “I am obsessed with lyrics and words. Not just what you’re saying directly, but also what you’re saying indirectly and can say subvertly. I like how words look on paper. I still handwrite things. I was a graphic artist when I was much younger, so I have an art background. Everything about the lyrics and words come first.”

With this drive in writing first, it’s clear why the lyricism in Empty Streets is so elegant. Aaron paints the rest of the sound with keyboards and synths, a complimentary partner to his words. This upcoming release is no exception. “I’ll hear it in my head and think, ‘Why am I singing it this way?’ There is just a feeling I get. You know when you hear a song and it just hits you right down the center, and you’re not sure if you’re about to cry or punch the ceiling? I try to find that moment for myself in the songs that I write. A moment that overwhelms me and I’ll chase that.”

Much like his previous release, Age of Regret was recorded alone at Aaron’s home studio. “This record is being mixed and co-produced by my friend Jaime Preciado, who plays in Pierce the Veil. He’s an old San Diego scene buddy of mine. He’s fantastic in postproduction, so we’ve been mainly remotely Dropbox-ing each other files, songs, and ideas.”

“I AM VERY IMPATIENT. I DON’T WANT TO WAIT FOR A HANDOUT OR A MAGIC MOMENT.”

Working remotely is no stranger to Aaron, even prior to current life conditions calling for it. He recollects that this comfort with the process comes from his punk days, “I grew up very DIY. I am very impatient. I don’t want to wait for a handout or a magic moment. Fuck that, let’s go! There is no reason you can’t make some stuff happen, now more than ever.”

Rolling right into the music video release for the album title Age of Regret, “It was pretty simple. I just thought, ‘I should make a music video. It’s an awesome thing to do’.” With Aaron’s career in film, connections were limitless on finding the right camera people and crew, locations, and sets. “I just produced it myself, I booked the location, I hired a camera guy [Chris Alessandra] that I am good friends with, as he’s filmed me in other movies before. I assembled a small crew, COVID safe as everyone had to be tested. As it was just me and no band, it was a pretty minimal amount of people. We shot it in downtown Los Angeles in one day, and I just gave the director a pretty loose vision of what I wanted. He knocked it out of the park, and it looks awesome!”

The video gives a good glimpse into what can be expected come June, along with a great vibe setter for the project itself. “I’m humbled and I’m grateful that anyone listens, or even gives a shit at all. I’m just happy that anyone is paying attention to it and I’m grateful for that. So, thank you. The video itself actually got me some interest, so this record will not come out as a self-release,” says Aaron.

In regards to where Aaron sees Empty Streets going in the future, he says “Hopefully, playing shows!” (laughs) “I want to tour again so bad. I haven’t been on a tour in probably eight or nine years. I have such a charmed career in life, but there is nothing ever, to this day, that has been as fun as touring. That’s how I want to live and that’s where I want to die. In the meantime, I’ll just keep making videos and songs and recording. So, by the time shows do come around, be ready to sit through two hours of my set!”