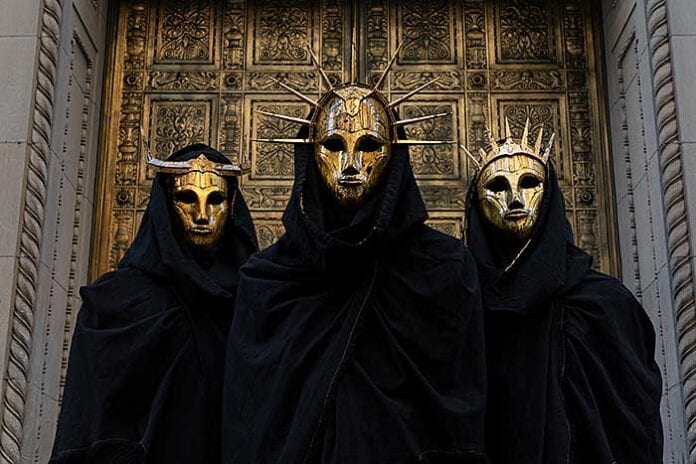 Imperial Triumphant is one of the most unique forces in metal today. The band captures the bleak and chaotic nature of New York in their unique avant-garde meets black metal style. Wearing full masks with imagery of the Statue of Liberty and the Wall Street Bull, they symbolize the myriad of faceless individuals who hustle on the busy streets day and night.

Imperial Triumphant’s newest masterpiece is Alphaville, a spastic combination of different sounds and ideas, which takes the band’s individualistic sound even further. From aggressive songs like the title track to a barbershop quartet in the track “Atomic Age,” Alphaville is a major step up from previous material, and this album will surprise fans.

We spoke to Imperial Triumphant vocalist and guitarist Zachary Ilya Ezrin to discuss Alphaville, all of the experimental elements, and what he can tell us about playing shows.

Why did you name the album Alphaville?
The name comes from the title track of the album, “Alphaville,” which was inspired by the Jean-Luc Godard film of the same name. The album is also inspired not only by the film but also by the French translation of “Alphaville,” meaning “number one city.” I find it to be a very New York state of mind and true to New York.

When the band is songwriting, how do all of your musical influences come together?
It’s a very delicate balance. I try very hard not to be too heavy-handed or too obvious or too much of anything, really. It’s all about keeping a little bit of mystery and balancing all of the ingredients in the entrée.

The album artwork ties in with your overall sound and image. Why do you think it’s important to have the visual and theatric elements in your music?
That’s a great question. For us, it’s important because I believe all of these non-musical elements help the first-time listener absorb all of the elements better. And I’ll be the first one to admit it’s a very dense album, it’s very challenging music. I think having that context going in helps people absorb it a bit easier. In the same sense that if you were watching a horror movie and you didn’t know it was a horror movie, the first hour would be pretty boring because nothing is happening. But you know when you watch a horror film that something terrible is going to happen. So, you power through and enjoy the tension. I feel like that same kind of context applies to our music. Any additional sort of direction you give the listener will help them understand your artistic vision.

Listening to Alphaville, there are very unique elements that aren’t in the previous albums, such as a barbershop quartet and [Meshuggah’s] Tomas Haake playing Japanese drums. Why did you decide to be experimental and include these elements?
I am always looking for the next thing that’s going to surprise our fans, the next thing that we can challenge ourselves creatively to infuse into our extreme metal sound. Taiko drums were a huge wish for our bass player, Steve [Blanco]. He really wanted to do that on the next album when we were mixing Vile Luxury [2018]. The barbershop quartet was my idea. I really wanted to see if I could write a barbershop quartet song that didn’t sound cheesy or lame, and I could make it kind of haunting and a little bit fucked up. On the next album, we’re going to do the same. We’re going to look for the next non-metal instrument to incorporate into our world.

Another thing that makes Imperial Triumphant stand out is your songwriting is more of a collaborative effort. Why do you think it’s important to write and jam as a band rather than write individually?
It’s really important for a couple of reasons. For me, I’m not a genius. I definitely don’t think Imperial Triumphant would be as powerful as we are if it was just me writing the music. I appreciate collaboration. I think it’s a very New York thing to do, working with like-minded artists. It’s something New Yorkers have done in the art scene for the past 50 years or something. It’s important to our culture. I think music will always benefit when you have the same number of cooks and we share the same vision. We’re not three guys with three different genres we want to bring into our band. We all have the same path that we’re walking down. So, I have no fears about a song that my drummer or my bass player may write. I know it’s going to be fantastic and glorious. And that’s something that I’m really grateful for.

“IF YOU’RE GOING TO SING ABOUT NEW YORK, YOU SHOULD TRY AND SOUND LIKE NEW YORK, TOO.”

You mentioned your influence with New York. How do you translate the sounds of New York into your music?
With my guitar (laughs). No, it’s how it needs to be done, really. Influence can come in many forms. If you’re going to sing about New York, you should try and sound like New York, too.

Why did you cover Voivod and The Residents?
(laughs) We like to surprise our fans, like I said earlier. I don’t think anyone expected us to do Voivod and Residents covers. They’re very not far from the style of music that we play. I think it would be to our benefit to try to do something out of our comfort zone, also to do an Imperial Triumphant take on an 80s thrash song. It’s going to be a bit more interesting than doing a note to note play through.

You have quite a few guest musicians on Alphaville. Can you mention who’s on the album and how they contributed?
Tomas on Taiko drums. J.L. “Phlegeton” Rey of Wormed, he did vocals on the Voivod cover. Colin Marston of Gorguts, who is also our producer and engineer, he contributed guitar parts to the Voivod cover. Trey Spruance, our producer, contributed a lot of synth of samples throughout the whole album. They’re very deep in tone. The rest are all people we worked with in the past and that we just love and wanted to continue working with, like Yoshiko Ohara from Japan of Bloody Panda fame. She’s been laying down screams and textures over our music for the last four or five releases. And then we had choir vocals from Sarai Chrzanowski and Andromeda Anarchia. They’re classically trained opera singers that really added another level of depth to our music. We had RK Halvorson who I’ve worked with in the past. He’s a great singer, he did the singing on the barbershop quartet. I had J. Walter Hawkes who’s an amazing New York trombone player. We put him on the record, as well. I don’t think I’m forgetting anyone else. I think that’s all of them.

“IT FEELS GOOD TO BE YOURSELF. IT’S DEFINITELY SOMETHING THAT TOOK A WHILE FOR ME TO FIGURE IT.”

You’re writing music about New York as your main influence and playing the style of music that you love. Why do you think it’s important, as a musician and a band, to be authentic?
That goes for almost any art form—you write about what you know. And the fans can tell. Any band that is great, there’s no faking it. I definitely would not be able to do interviews like this one and talk about my band with as much certainty if I didn’t really believe in what I was writing and singing. It feels good to be yourself. It’s definitely something that took a while for me to figure it. And you can tell by listening to earlier Imperial records, they were a lot more generic black metal. I think it’s very important for musicians and artists to find what they know a lot about and find what is true about them and explore that.

What are your expected plans, taking the virus, etc. into consideration?
We’re definitely remaining optimistic. We want to get back on the road as soon as possible. Confirmed is the Devastation on the Nation tour with Rotting Christ in February. All of our August European festival dates that were for this year got postponed to next year, so we’re probably doing those then. We are looking at the prospect of doing a short US run in November, provided that things are getting better, that venues are still open, and other details. That would be tremendous. As I said, we’re dying to get back out there. We really can’t wait to play for fans again. And we really can’t wait for things to slowly get back to normal.

THE USED: In Quarantine

NILE: Back to Basics