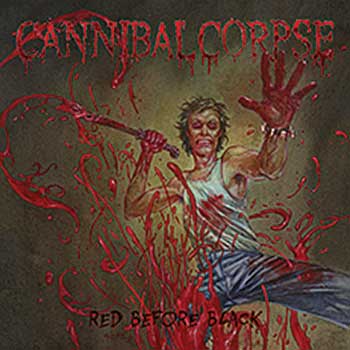 CLASSIC DEATH METAL: For its 14th album, legendary band Cannibal Corpse keeps up the same level of quality it has had since around 2006’s Kill, the group somehow getting a rejuvenation of life and energy many albums into a death metal career and rolling with it until this, the excellent Red Before Black. While the opener “Only One Will Die” does a great job of laying down the Cannibal Corpse death metal pummel, it is the album’s title track that will make listeners stand up at attention, the song totally ravaging with an almost punk edge—it’s raw death metal, it’s loose around the edges, and it has the energy of a bunch of teenagers with the precision of wise veterans. It’s one of the best Cannibal Corpse songs in years, and the rest of the album doesn’t let up either. “Code of the Slashers” proves just how heavy the band’s riffing can get. “Firestorm Vengeance” shows off Cannibal Corpse at its midtempo glory, with labyrinthine riffs and a powerful vocal performance. “In the Midst of Ruin” has a hysterical bass and guitar interplay that is Dying Fetus-like in its intense complexity. This is a killer album. It’s not that we expected anything less than great death metal, but Red Before Black is actually a cut above even the already high standards that Cannibal Corpse has set for themselves. ~ Greg Pratt