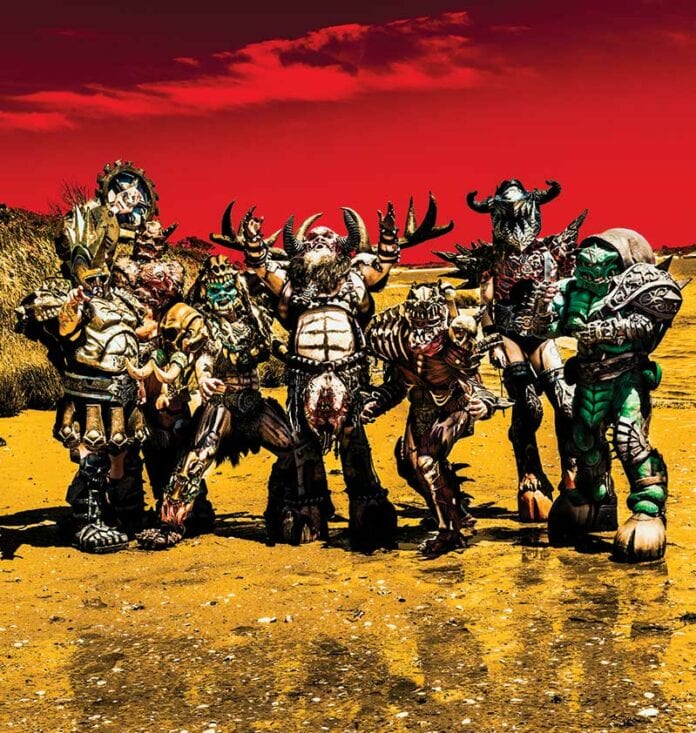 “GWAR lives motherfucker!” says new frontman Blothar after every show as the band leaves the stage. And it’s true. Not even the death of original frontman Oderus Urungus (Dave Brockie) in 2014, as well as their fallen brother guitarist Flattus Maximus (Cory Smoot) in 2011, can stop GWAR. Their 14th full-length, The Blood of Gods, will certainly please diehard devotees, while guaranteeing to pick up new fans from the band’s Warped Tour run that plagued cities across America during the summer. Vocalist Blothar and guitarist Pustulus Maximus speak about the new album, carrying on the GWAR spirit, and how they enjoy spraying blood and bodily fluids on its audience.

It’s common knowledge that Warped Tour attracts a younger crowd. What was your reception like from the audiences?
Pustulus: The younger crowd is great because they’re…younger. They are inexperienced, and some would even say untouched by our hand, physically. We’re here to change all that and spray them with blood and bodily fluids and expose them to a brighter future through GWAR.
Blothar: Yes, we’re exposing ourselves to them! It has been a joy to expose ourselves to this crowd that has never seen GWAR before. And there was a lot of them every day. So, we definitely were performing to an audience by and large who does not know who we are or what we do. And they fall easily into every trap we lay for them!

Blothar, what’s been the most challenging part about stepping in for Oderus Urungus?
Blothar: Well, I’m not Oderus. I’m the Berserker Blothar, and I sing the way I sing. I do the songs the way they come to me. GWAR has always been a group who do what we do very well and we do it collectively. I want to say once and for all, and we’ve said it many times, we do what we do for Oderus Urungus. He was the greatest rock ‘n’ roll singer ever to grace the face of this planet, and the things that we do are in honor of him. I think carrying GWAR forward is the best thing we can do for that hideous, baby raping alien Oderus Urungus.

Were there any concerns if the fans would accept you both as replacements?
Pustulus: We weren’t as concerned about the fans accepting us as the money accepting us!
Blothar: We’re never concerned about what the fans think. The fans think what we want them to think. There was some concern that perhaps GWAR in the new millennium would be unable to keep up with humanity, because humanity is so dark and self-destructive. And that’s the theme of the album, The Blood of Gods. It tells that story—the story of GWAR struggling with humanity. So, you can listen to the record and find out more about that. The narrative is very clear on the album.

Pustulus, as you replaced guitarist Flattus Maximus, what was your goal coming into the band?
Pustulus: To not suck! My main goal entering the band was to continue on the tradition of the Maximus clan and to bring my own flavor of rock ‘n ‘roll back to this group. I think it fits in very well, and I think we do Flattus much justice. I had broken into the space coffin and got to Flattus’ guitars and brought them on tour to pay homage to my fallen cousin.

Your guitar solos throughout The Blood of Gods are blazing and even catchy. What were you going for solo-wise? Were they spontaneous or well thought out?
Pustulus: Everything I write I try to think it out. Most of the stuff, I’ve written eons ago, so I just pull riffs out of a magic hat for the most part. I’m more of a blues and rock ‘n’ roll style guitar player, and that’s what I enjoy and that’s what my mom says I’m good at. So, that’s what I bring to the table.

Blothar, you were Beefcake the Mighty 20 years ago. What made you come back after all these years?
Blothar: Beefcake experienced mitosis and divided into two, and I am the better half. It’s been different, because we figure that’s naturally just something that assholes do, like play bass. That’s what cool guys do. So, now I’m an asshole all of a sudden, but I’ve adjusted well. Years ago playing bass guitar for this band was a dream, like a distant dream, a nightmare. But now being the lead singer, I’ve got more midgets than I can possibly molest. So, I’m perfectly happy.

The Blood of Gods has more of a classic hard rock sound mixed with 80s metal. What were you going for with this one?
Pustulus: We did come together in a unified front on this one. I wanted to make a record that was different but the same. I didn’t want to make the same four records we just did before. That was a good era of GWAR, but things stopped being eclectic at some point and started molding into, I don’t want to say, meathead metal riffs…
Blothar: Meathead metal riffs! I’ll say it!
Pustulus: I’m much more comfortable in the realm of punk rock and rock ‘n’ roll. Not that I dislike metal by any means, but I think by today’s standards, metal has gotten boring. There’s only a few bands that I listen to anymore in the heavy metal genre. And the ones I like do it really well. I think it’s reached a point where it’s not being expanded upon like in the 80s and 90s when it was fresh. Now it seems like everybody’s trying to rip off Lamb of God.
Blother: What a terrible idea! That’s like stealing from a K-Mart! Everything Pustulus said is right on the money. I think we really didn’t have a choice but to do a record like that. We did the record we needed to do. It’s not like we were going to be able to sit up there and do what we had been doing without Oderus and doing this sort of pale imitation of it. That wasn’t an option for us. We needed to do something that defined this band going forward. And that’s what we did with this record.

“HUMANITY HAS JUST STEPPED OFF OF THE EDGE, AND GWAR FOUND OURSELVES IN A STRUGGLE WITH HUMANITY.”﻿

Is there a theme running through the album?
Blothar: The theme is the struggle, the war on GWAR. The idea is that GWAR started to struggle keeping up with humanity, because humanity, they just kept stealing our act. They’re cutting people’s heads off on television. They’re enslaving entire nations in giant slave camps. Humanity has just stepped off of the edge, and GWAR found ourselves in a struggle with humanity. There’s a lot of different threads that run throughout. There’s the story of Sawborg Destructo that is part of the record. The war on GWAR is part of the record. That’s probably the main theme that keeps coming back throughout the album. And then, of course, we deal in our own way with the passing of Oderus Urungus, which is the most significant event to happen to GWAR in the history of its existence.

Did you unveil any new songs from The Blood of Gods on Warped Tour?
Pustulus: We played “Fuck This Place” off the record. It was purely coincidence that we decided to play that song and play Warped Tour at the same time. It developed a new meaning as the tour went on.
Blothar: Each new place is a place to fuck!

GWAR’s been known to do a few cover songs. What made you want to do AC/DC’s “If You Want Blood (You Got It)?”
Pustulus: What do you mean? We wrote that song! We let them use it because that Bon Scott is one hell of a guy. They never really paid us any royalties, and eventually we had to collect the debt. It’s sad that Bon Scott’s not around anymore, but if you don’t pay up with GWAR, you might not be around forever. And AC/DC is one of the best human rock bands of all time.
Blothar: We thought about changing the name of the song to “Contractual Obligation,” but we decided not to. “If You Want Blood” sounds better.

Even though members have come and gone and passed away over the years, does the essence of each character remain important to the legacy of GWAR?
Pustulus: Just like with anything that exists, evolution is important. We continue to move forward, evolve, and change, but still carry on the legacy of the past at the same time. I think that’s important, but I think change is important. If we’re going to stay the same forever, I think people would lose interest in us. And quite frankly, I got a habit to support, so I can’t let that happen!
Blothar: It’s definitely true that by carrying the characters forward, the spirit of GWAR lives on. And I think locating that spirit in one individual is a mistake that some fans make, and the fans who listen to us are supportive of that. There’s more effort by more people involved in driving this thing forward and keeping it going. At the end of the show, we say, “GWAR lives motherfucker!” And it’s true, GWAR does live. And GWAR will keep moving and keep changing, and the only thing that’s inevitable, as Pustulus said, is change. It’s going to happen. And I think this album demonstrates that this is not a legacy band where you’re going to see some guys playing Scumdogs of the Universe [1990] for the next 20 years. We’re making music, we’re writing music, and we’re a living rock ‘n’ roll band. That’s what we want to be and that’s what we will be.