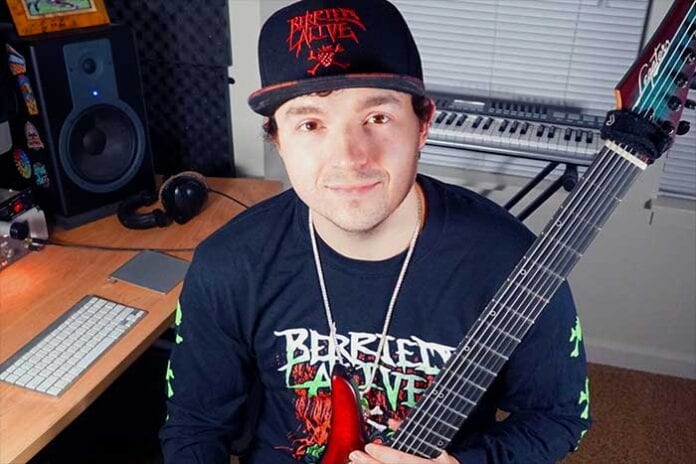 Berried Alive is taking the world by storm riff by riff and receiving global recognition from some of the biggest names in rock and metal—Synyster Gates, Tom Morello, Tommy Lee, Jeff Loomis, and Jamey Jasta. We spoke with guitarist Charles Caswell to learn all we can about Berried Alive and his crazy style of playing.

For those who aren’t well versed with your playing or Berried Alive, can you give our readers a brief history on you and your band?
Berried Alive is a music group and clothing line that consists of me and my wife Kaylie. I have a history in playing and touring in full bands, and reached a point where I wanted more creative freedom and more time with my wife and family, so I started seriously working on my own music in 2014 and haven’t looked back since.

Can you describe your style of playing for those who haven’t heard it?
The style really goes all over the place. It’s very avant-garde. I’ll get an idea in my head, and then sometimes I’ll have to create an entirely new technique to be able to play it, which sometimes takes months or even years to start getting down. I’ll write some super crazy techy stuff one day, and then the next I’ll do traditionally structured singer-songwriter stuff with my acoustic. It’s a totally free expression of myself.

How did your style of playing progress to what it is now?
It’s really important to me to have something new to offer guitar and music, so when I’m writing or practicing, I try my best to make sure that it’s something that I haven’t heard or seen much before. It gives me more of a reason to do it because it gives people more of a reason to listen. I really want to provide as much value as I can to my music. It all boils down to a whole ton of tinkering around with my instrument, practicing, and developing my production skills.

What is your writing and composing process like when you write a song?
My writing always stems from some initial idea, maybe a melody, guitar riff, or even a drum beat. I’ll spend a good amount of time freehand recording ideas that are cohesive with the starting idea, and then eventually I’ll have different parts. From there I’ll move these parts around until it all works how I want. It’s like putting together a puzzle while creating the pieces. Sometimes when I’m bored of my own ideas, I’ll listen to some different styles of music I like and try to replicate the sounds with my guitar. For example the song “Fuego” was inspired by a few crazy sounding dubstep samples I found and tried to replicate with my guitar and pedalboard.

What’s your gear look like, what helps you create that unique sound?
I’m using a Line 6 POD HD500X pedalboard for all my amps and FX, and I’m running Pro Tools 10 with mostly stock plugins on a computer that’s a decade old. I use a lot of pitch shifting effects on my POD, and I play around a ton with harmonizers. Most of my guitars have a push button killswitch installed, which creates a really fun glitchy sounding effect. I also use Floyd Rose floating bridge systems so I can do huge note dives, chirping flutter sounds, and give notes way more character than a traditional guitar bridge ever could. Lastly, I have a built in Fernandes sustainer system on my lead guitars, so at the flip of a switch I can sustain a note or a harmonic of the note for literally days if I wanted to.

Who are some of your biggest influences as a guitarist?
Jimi Hendrix, Dimebag Darrel, Zakk Wylde, Steve Vai, Synyster Gates, Tom Morello, Buckethead, Les Claypool, and Stevie Ray Vaughan all had a huge impact on the way I play and think about the guitar. The list is way longer than that, but those are the big ones for sure.

You’ve been getting a ton of well deserved attention from some big names. That has to feel amazing to get that type of recognition?
It’s pretty crazy and still hard to believe sometimes. The existence of these legendary musicians is a big reason why I sound how I do, so for them to appreciate me stepping out of the ordinary as they have, means so much to me at a level I can’t even describe.

What are some of your favorite riffs you’ve written?
The intro to the song “Fuego” is so fun to play. It combines having to turn off and on a lot of different FX on my POD while simultaneously doing some really weird techniques on my eight string guitar. It has destroyed a ton of guitar picks though (laughs). Another favorite is the intro lead to “The Pun-isher” where I have to quickly move between using the killswitch and the tremolo of my guitar. I’ve never seen anyone do this before, so I really wanted to go nuts without overcomplicating the actual lead itself with a ton of notes.

What’s next for you?
Right now we’re finishing up our fifth full-length album, and we’re working on a new clothing collection that we’re berry excited to share with everyone.