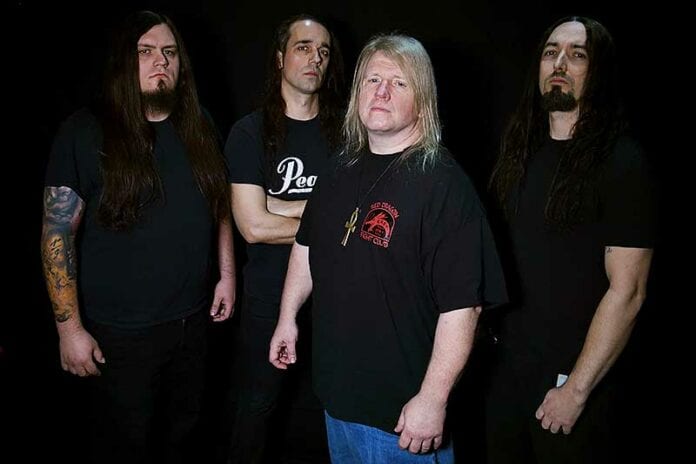 Technical death metal band Nile has been churning out slabs of authentic Egyptian inspired metal since 1993. The band is on fire as of late with a renewed sense of brutality, which is on full display on its ninth full-length, Vile Nilotic Rites, its first album in four years. Featuring leader Karl Sanders (guitar, vocals), Brian Kingsland (guitar, vocals), Brad Parris (bass, vocals), and longtime drummer extraordinaire George Kollias, Nile has never sounded better. We spoke with Sanders about Vile Nilotic Rites, how he’s inspired by Egyptian history, and news on his future solo album.

How did you come up with the album title, Vile Nilotic Rites?
It’s from the HBO series Rome. There’s an episode where the newsreader is making a political announcement. They’re attempting to denounce Mark Antony and demonize him because they want to go to war against them. They’ve got to say enough bad shit about him to convince the general populace to support a war on Mark Anthony. So, the newsreader does this whole big thing, “He worships dogs and reptiles. He blackens his eyes with soot, he dances and plays the cymbals in vile Nilotic rites!” So, I hear this, I’m watching the TV program, and I go, “Fuck! If that’s not a Nile song, then I don’t know what the fuck is.” It took a while to write it after I saw it. Because it’s not quite enough to make a whole song out of, it took a little while for me to figure it out. I had to read a few more books and figure out exactly what the fuck needed to be done.

You spent a lot of time on the pre-production. Did this process give you more familiarity or confidence with the material?
I would say both—the familiarity with the material and the confidence of knowing that we had it together. We’d done the work and we knew what to do with these songs, and we’d already experimented and tried all the different things we wanted to try. And there’s confidence that comes from that, confidence in the delivery, when you fucking know deep down and know that’s the best thing to do. It’s confidence that you can’t come by any other way than actually doing the work.

“IT’S CONFIDENCE THAT YOU CAN’T COME BY ANY OTHER WAY THAN ACTUALLY DOING THE WORK.”

The album was recorded in two studios—your own home studio and then one in Greece for George’s drum parts. How did that work?
I flew over to Greece and then we worked on it together. It was a lot of fun, actually. It was just me and George working together very closely, and it was a very rewarding experience, building the songs up together from the ground. I think there’s no substitute for actual hands-on working together.

As far as the production itself, Vile Nilotic Rites has a huge cinematic sound and was mixed and mastered by Marc Lewis.
It’s big. It’s heavy. It’s cinematic. And it’s also pretty cleanly recorded. I wanted to be able to have it be big and heavy and yet be articulate, where you can hear what’s going on. Because really, if people can’t hear it, then is it there? It’s a deep philosophical question that I’ve been plagued with many times. Like, you play all this great fucking shit on a fucking record, but if it doesn’t translate to the listener’s ear, then it doesn’t matter if there’s all this awesome guitar and drumming. If it sounds blurry or muddy or doesn’t come across really as it’s intended to, then it’s a fail because the audience doesn’t receive the point of it. So, I really wanted this album, when you play it and you hear it, you get what we were intending for you to hear. And that’s not such a fucking easy thing to do. Unfortunately, making records isn’t that fucking simple.

Would you consider yourself a perfectionist or just a hard worker?
It depends on who you ask! If you ask my wife, she’d say perfectionist. If you asked me, I’m just a guy who’s willing to work his ass off to do the best job I can, given the tools and the circumstances available to me. It doesn’t have to be perfect, perfect, perfect. But how much is perfect, or does it need to be perfect? I don’t know. I’m just trying to do the best I can.

Besides the guitar, you’re also credited with playing the bağlama and bouzouki, which adds that great Egyptian Arabic flavor. When do you know to use them and not overuse them on certain songs?
Firstly, that’s exactly why they’re on a Nile record. They’re stringed instruments, so a lot of that technique transfers over pretty easy. It’s not an impossible task. The matter of taste involved in deciding what goes where is I think very important. I think tastes can carry one a lot farther than just mere techniques. There are different things in our catalog that are vaguely similar but not exactly the same. There was a lot of unique instrumentation that went in that thing. I think these things add different flavors and different colors, different textures, and it really helps tell the story of the song.

“IT WAS AN INCREDIBLY MOVING EXPERIENCE SEEING THESE DESOLATE, DESTROYED, CRUMBLING, FALLING INTO ALMOST NOTHING PYRAMIDS AND ATMOSPHERE.”

As far as lyrical inspiration, you already mentioned “Vile Nilotic Rites” being based on the series Rome, but what about the other songs?
For the other songs on the record, there was quite a bit of information that was had from the trip I took a year before last to Egypt to work with Nader Sadek. He took me to many places to see all kinds of incredible archeological and historical stuff and all the museums, all the temples, all the necropolises. We went to so many places. It was an incredibly moving experience seeing these desolate, destroyed, crumbling, falling into almost nothing pyramids and atmosphere. It was quite moving to me. I was very inspired. It really helped writing quite a bit of the songs on this album.

Do you watch a lot of movies like 300 or The Scorpion King?
Oh yeah, I’m definitely a fan of the genre. I can’t help it. I’ve watched 300 regularly and the Spartacus series that was on Starz a few years back. And all the old epic footage, too, I’m a fan of as well. I just love the genre. And the soundtracks from these movies are very inspiring. I’ve got all those and they are regularly in my playlist.

What’s next? Any plans for another solo album?
I’ve really been wanting to get to work on the next solo project for so long. People have been asking me about it, and it’s something that I really want to do and I’m going to make the time to do it. Guitarist Rusty Cooley—he’s a fabulous guy, incredible guitar shredder—he’s going to be doing some acoustic work on this solo record. We’ve been talking about it. That’s going to be a lot of fun.